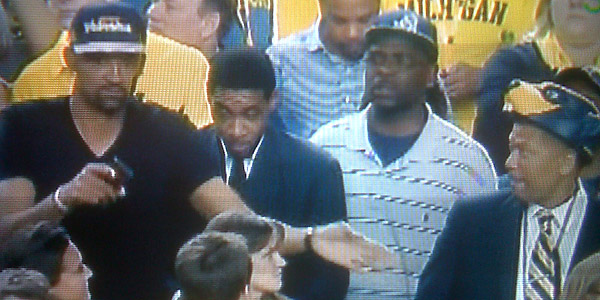 The pregame festivities at the 2013 national championship game between Michigan and Louisville took a backseat to five guys who for some reason have been anointed as God’s gift to college basketball.

Meet Jalen Rose, Juwan Howard, Ray Jackson, Jimmy King and — yes, most notably — Chris Webber, also known as “The Fab Five.” Rose, Howard, King, and Jackson sat in the same section of the Georgia Down to watch their beloved Wolverines, but C-Webb decided to sit elsewhere — although his arrival created a bigger buzz than anyone else.

“I know you guys were surprised,” Rose told USA Today after Webber arrived Monday. “I am not surprised that he came. We’ve been friends since we were 12 years old.”

As entertaining as they were during their two years together, the Fab Five never won a Big Ten title nor did they win a national championship. They did go to two straight Final Fours, which is a big achievement, but fell short twice in the title game.

So why are they so beloved?

Part of the love affair with the Fab Five stems from the coverage they have received from ESPN and writer Mitch Albom, who authored the book “Fab Five.” Albom’s great writing skills elevated the Fab Five to undeserved legendary status. If you read the book it basically painted Rose, Webber, Howard, King, and Jackson as some sort of basketball pioneers who invented trash talking and baggy shorts, as if no else did these things before they arrived.

First of all, trash talking has been a part of basketball well before the Fab Five. As for the baggy shorts, Michael Jordan wore them first during the 1980s then Jerry Tarkanian’s UNLV Runnin’ Rebels made them fashionable in the early 1990s. All the Fab Five did was grow the shorts 2 inches longer and made it fashionable. If there’s major fashion statement the Fab Five contributed to the game were the black shoes and the black socks. They basically took Brad Sellar’s idea — who coordinated the all-black shoes for the Chicago Bulls in the ’80s — and added their own flavor. 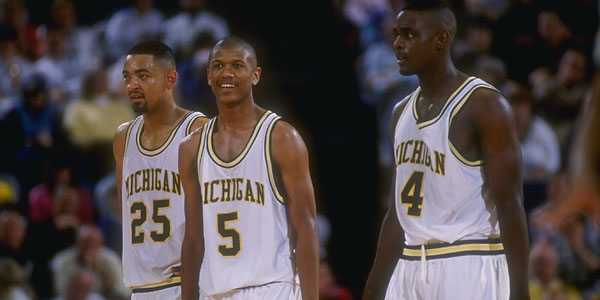 ESPN is partly to blame for the whole Fab Five phenomenon, producing a documentary in 2011. Meanwhile, the 1989 Michigan squad that featured Glen Rice, Rumeal Robinson, Loy Vaught, Sean Higgins, and Terry Mills barely get a mention these days. They’re the real Fab Five!

Webber’s presence at the 2013 NCAA championship game became a big story especially after his Detroit pal, Rose (now a commentator for ESPN) campaigned for him to move past hard feelings and reunite with the group.

Webber played a major part in having Michigan’s Final Four appearances in 1992 and 1993 vacated. His bitter falling out with the school came after the NCAA in 2003 required the school to disassociate him and three other players for 10 years, a punishment that ends in May.

But time heals all wounds and Webber seems to be coming around. He posted this on his Twitter account: 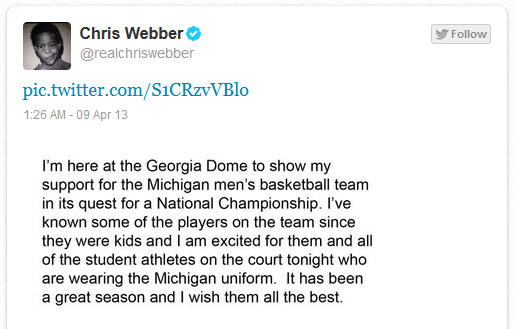 For the rest of his life, Webber will always be associated with one play: the timeout. He will never live that down because it turned out to be the defining moment of the 1993 national championship game against North Carolina. It painted Webber as the goat and became the butt of all jokes. Webber rarely talks about “the timeout,” which tells you he hasn’t gotten over that nightmare, and Rose believes it may be the reason why C-Webb wants to distance himself from his time at Michigan.

“I think the timeout had a lot to do with it,” Rose said on his podcast on Grantland.com. “I think he wants to disassociate himself with that moment and with that school — in theory, with us — to kind of rebuild his life mentally to say, ‘My career started my rookie year in the NBA.’ That’s unfortunate.”

The 2013 Michigan Wolverines lost to Louisville in the NCAA championship game, but their tournament run shouldn’t be overlooked. It has been two decades since Michigan’s basketball program has been relevant, and John Beilein’s squad should be commended for their great work.

Maybe 20 years from now we’ll be talking about Trey Burke and Co. instead of the overhyped Fab Five.