I can’t believe it has been 10 years since Kobe Bryant set up Shaquille O’Neal with that memorable lob pass in Game 7 of the 2000 Western Conference finals that resulted in a earth-shaking one-handed slam dunk that changed the landscape of the NBA and ignited one of the best runs in league history. This past decade, from 2000 to 2009, will forever be known as the Shaq and Kobe Era. No two players commanded the spotlight on and off the court better than The Diesel and The Black Mamba. They each have four NBA championships (three of them as teammates), and between them they have four NBA Finals MVPs and two regular-season MVPs and 27 All-Star Game appearances. Their on-court dramatics nearly matched their off-court soap opera. Their legendary feud was the best long running reality TV in the NBA. Bryant and O’Neal head a list of the 10 players, compiled by OneManFastBreak.net, who defined this past decade (from 2000-2009) regardless of position.

10. STEVE NASH, guard: Nash was a very good point man in Dallas and posted some very good numbers. But when he got traded to Phoenix, some media members must have developed some kind of Alzheimer’s because they voted him MVP…twice! Sure, his stats got better and his Suns teams were fun to watch. But Nash’s game hasn’t changed since Don Nelson made him a full-time starter. The knock on Nash is that he’s the only two-time league MVP who has NEVER gotten past the conference finals.

9. DIRK NOWITZKI, forward: Zeeee German has easily been the best European player the past 10 years and is still the only Euro to win the Maurice Podoloff  trophy as the regular season MVP. Nowitzki, who has redefined the power forward position as the “soft” forward position, can sometimes get lost in a physical battle but when he’s allowed to float near the top of the free throw line, he is one of the deadliest shooters the game has ever seen.

8. DWYANE WADE, guard: When Pat Riley drafted Wade in 2003, the fortunes of the Miami Heat turned for the better. Nicknamed “The Flash” by Shaquille O’Neal, D-Wade rose to prominence with his spectacular play in the postseason. He powered the Heat to the Eastern Conference finals in 2005 in only his second season, and then lifted the Heat to a NBA championship in 2006. His place his history was permanently etched when Wade captured the MVP of the Finals with a spectacular series against the Mavericks.

7. CHAUNCEY BILLUPS, guard: His career took off when Larry Brown became the head coach with the Pistons. At 6-3 and well over 200 pounds, Billups is one of the most physical point guards in the league. He overpowers smaller guards and he is deceptively quick enough to get past most PGs. Billups’ crowning achievement came in 2004 when he led the Pistons to a victory over the Lakers in the NBA Finals and was named the series MVP. Nicknamed Mr. Big Shot, Billups is one of the best clutch shooters when the game is on the line and his supreme confidence never wavers. 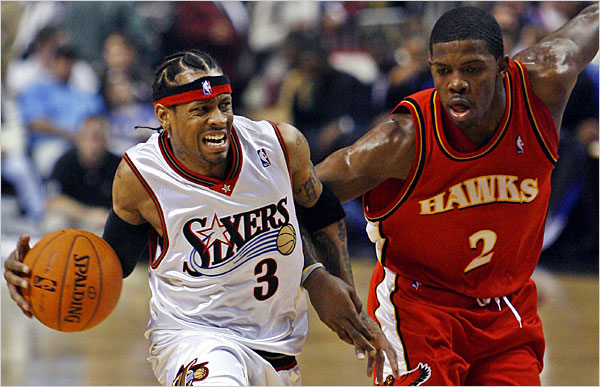 6. ALLEN IVERSON, guard: From 2000 to 2007, A.I. had all the answers. He was the most dominated little man in the game and a certain Hall-of-Famer. Iverson was an explosive scorer, a player who can had the great ability to overcome any type of defense. All defenders were at his mercy when he isolated at the top of the key. During the decade, Iverson hit the 30-point scoring average five times and was named the 2001 league MVP. He took the Sixers to the NBA Finals that year, but lost to the Lakers in five games. A.I. was also a polarizing figure off the court. He was the poster boy for the Hip-Hop generation with his trademark cornrows and countless tattoos. His “we’re talking about practice!” soundbite has become a timeless loop on SportsCenter.

5. LEBRON JAMES, forward: Even though he came to the party late, LeBron James has certainly left an indelible mark in just seven seasons. He was the most heralded and super hyped high school player to ever enter the NBA, and was tabbed the Chosen One by Sports Illustrated. King James has changed the culture in Cleveland after the Cavaliers made James the No. 1 overall selection in the 2003 draft. James’ arrival gave Cleveland sports fans a ray of hope, something that has been absent for years because of past failures by the Cavaliers, Browns and Indians. In his fourth season, James powered the Cavs to the franchise’s first appearance in the NBA Finals. Then, in 2009, James captured the league MVP, joining Jim Brown, Otto Graham, Brian Sipe, Al Rosen and Lou Boudreau as the only Cleveland pro athletes to be named MVP. LeBron will move up on this list if he ever wins a NBA title.

4. KEVIN GARNETT, forward: The Big Ticket has redefined the power forward position. Before KG, power forwards were like plow horses whose were main jobs were to protect the centers and the guards and, outside of a few guys like Kevin McHale, Charles Barkley and Karl Malone, did most of the dirty work. But Garnett had the unique ability to play inside and outside and could outrun most guards in the open court. From 2000 to 2005, KG’s stat line was 22-12-5. His length was also a huge weapon on defense as he could defend any of the five position players. KG was named regular-season MVP in 2004 and, after getting traded from Minnesota to Boston, won a championship ring with the Celtics in 2008 that pretty much sealed Garnett’s legacy. If it weren’t for the next guy on this list, Garnett would be the No. 1 power forward in the history of the Association.

3. TIM DUNCAN, forward: Nicknamed The Big Fundamental by Shaq, Duncan was a picture of consistency the past 10 years and the foundation of the San Antonio Spurs’ mini-dynasty. Duncan was named regular season MVP in 2002-03, earned NBA Finals MVP in ’03 and ’05, and a member of the All-NBA first team seven times. The Spurs were consistently one of the better defensive teams in the league because Duncan was such a great help defender. At times, Duncan was overlooked because his game is unspectacular. But let me ask this? Is averaging 20-plus points, grab 10-plus rebounds and block nearly two shots a game unspectacular? Thought so. My only knock on Duncan is that he was reluctant to play center because of the physical nature of the position. He was more finesse. But I’m not hatin’ on Timmy D. He will go down in history as the greatest power forward in the history of the game. 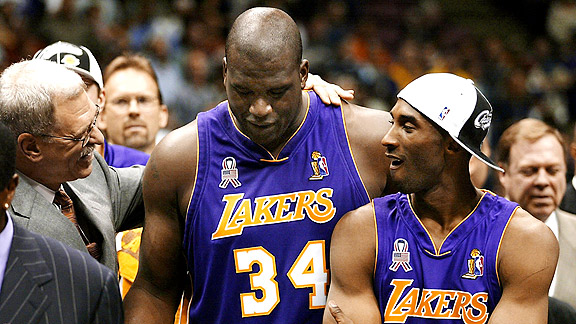 2. SHAQUILLE O’NEAL, center: Dominant. That’s the best way to describe Shaq, also known as The Diesel, Superman, The Big Aristotle, and The Big Shaqtus. Though he only won one regular season MVP award (2000), you could argue that Shaq was the best player in the Association from 2000 to 2005, and could have easily won five consecutive MVPs. He did, however, manage to win three consecutive NBA Finals MVPs. The only person to ever pull that off is the great Michael Jordan. O’Neal averaged 30.7 points and 15.4 rebounds in 23 playoff games in 2000, and averaged 30.4 points and 15.4 rebounds in powering the Lakers to a record-setting 15-1 mark in the 2001 playoffs. In his prime, and when healthy, no player in the league commanded such big attention as O’Neal did. Sometimes a double was not enough to slow down Super Shaq because he would simply overpower mere mortals who got in his path.

1. KOBE BRYANT, guard: Bryant scored 81 points against the Toronto Raptors in 2006. Meditate on that one for a few seconds…EIGHTY-ONE points! I never saw Wilt Chamberlain score 100 points in 1962, and no one seems to have any footage of that game. I’ve seen the box score but that’s it. I have Kobe’s 81-point game at Staples Center on my DVR and I still can’t believe a NBA player, while competing against paid professionals, can score that many points. Michael Jordan’s best scoring output was 69 points. Kobe surpassed that in the third quarter! Jordan is the ultimate barometer for today’s NBA superstar. His six NBA championships is considered the benchmark because, let’s face it, nobody is going to beat Bill Russell’s 11 rings. Jordan supporters say MJ was a once-in-a-lifetime player and there will never be another like him. ESPN’s SportsCentury series tabbed him the No. 1 athlete in the past 100 years. Well, obviously those people who said MJ is the greatest is completely ignoring Kobe Bryant.