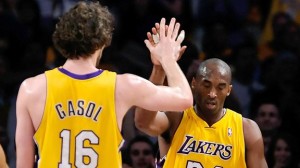 The Lakers' formidable duo of Pau Gasol and Kobe Bryant aim for a three-peat this season.

The Los Angeles Lakers recently started training camp at their team facility in El Segundo, Calif., without little fanfare. There were no one-hour ESPN specials to announce their existence and there were no pyrotechnics to introduce Kobe Bryant, Phil Jackson and Pau Gasol – the real Three Kings of the NBA.

Unlike their neighbors from South Beach who boasted that they are going to set the league on fire this season, it’s business as usual for the Lakers – and that’s how they like it in Title Town. The two-time defending NBA champions don’t need to flex their muscles or brag to everyone how great they are. Those 10 gold ball trophies sitting in their practice facility speak for themselves.

The NBA season ended with the Lakers on top and it’s only fitting to start the season talking about the Lakers first.

Add free agents Matt Barnes and Steve Blake to an already formidable roster and you have easily the best and most complete team in the Association. There should be no argument there.

All the buzz during offseason was how good or great the Miami Heat will be this season with the addition of LeBron James and Chris Bosh to go with Dwyane Wade. Even some Las Vegas oddsmakers are picking the Heat as the favorite to win it all this season. Last time I checked, two of those three guys haven’t won an NBA title and Wade won his four years ago. Adam Morrison has more championship rings than the much-hyped Heat trio!

As good as Kobe is, he has never won a championship without a dominant big man. He had Shaq earlier in the decade and now he has Gasol and Andrew Bynum (aka The Hollywood Hills) at the end of the decade.  Add Odom to the mix and Bryant is blessed with three freakishly good low-post players who can score, rebound and defend.

Since acquiring Gasol, the Lakers have won more than 80% of their regular-season games and have been to the NBA Finals three consecutive seasons – winning the last two. His performance in Game 7 of the NBA Finals against the Celtics was legendary, and he could have easily been named the Finals MVP.

Gasol is going to have to carry the load for the first couple of months because his fellow big man, Bynum, will be sidelined recovering from knee surgery due to a torn meniscus. There were reports that Bynum was too casual about getting his knee fixed during the offseason, but Lakers General Manager Mitch Kupchak said on Monday that the Lakers were not “blindsided” by the late surgery and the Lakers were well aware that Bynum could miss the first month of the season.

“The diagnosis, which was made back in the playoffs was correct,” Kupchak told NBATV on Monday. “When the surgery rolled around in mid-July, we anticipated that [the cartilage] would be taken out and that’s normally six or seven weeks in terms of a recovery. [The doctor] chose to sew it back in place, which is better for the player in the long run because he’s not missing cartilage; it’s better for his career, better for his life down the road. The downside of doing that, it takes a real long, long time to heal. So, something that we felt would be six weeks now goes to 10 to 12 weeks.”

Bynum is not the only Laker starter sitting out training camp. Bryant had offseason knee surgery on his right knee, and as a precaution he is easing his way back into form. When Bryant was asked what the time table is for his return, he said: “When [the knee] is ready, I’ll play.” Bryant said he rested all summer and there shouldn’t be any worries regarding his health. Translation: He’ll be starting on opening night.