Instead of asking his alter ego if he’s faster than a speeding bullet or able to leap tall buildings on a single bound, Orlando’s easy going All-Star center should have asked himself this question: “Do you have a go-to move in the low post?”

Howard is without question the best center in the NBA today and has been able to dominate by bullying his way for layups and dunks against inferior opponents, such as the Atlanta Hawks. But against better competition, such as the Boston Celtics, his immaturity and lack of fundamentals rear their ugly head.

Here’s a memo to Dwight Howard: You can’t call yourself Superman when you can’t make a jump hook from 2 feet.

The Celtics, mainly Kendrick Perkins, Rasheed Wallace and Glenn Davis, exposed Howard’s ineptness by pushing him out of the block and frustrating him with some hard fouls. Boston opted to play Howard straight up for much of the game and stayed attached to Orlando’s 3-point shooters, banking on the fact that Howard won’t be able take advantage of the Celtics’ single coverage.

Boston limited Howard to 13 points, but more importantly held the Magic without a 3-point basket in the first half and 5-for-22 the whole game. The Celtics’ stifling defense enabled them to take 1-0 lead in the best-of-seven series, hand the Magic their first loss of the playoffs and left Superman grounded and frustrated. 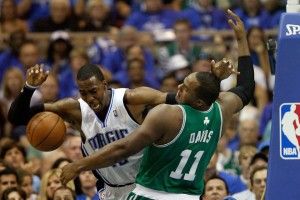 Dwight Howard gets called for an offensive foul after an inadvertent elbow to the face of Glenn Davis. (NBAE/GETTY IMAGES)

“For me, I just have to get into a good rhythm. When I’m out of rhythm, I play like robot. I just need to get into a rhythm and not get into a wrestling match with those guys and that’s playing into their advantage,” said Howard, who made just three of 10 shots from the field and had seven turnovers in a 92-88 loss to the Celtics. He shot 84% from the field and averaged 21 points in Orlando’s four-game demolition of the Hawks in the conference semifinals.

“It was just like that in the first series against Charlotte. They had a lot of guys, a lot of bodies trying to frustrate me and get into my head and play their game. So I just have to do my best, stay focused and not get frustrated,” said Howard, who had 12 rebounds, five blocks and made seven of 12 free throws.

Though Rivers was pleased with the defensive effort, he thinks his team can do better.

“We are leaving them on an island, so that’s very difficult. When you have enough bigs that can just stay in there and take the pounding, it’s a good thing. But all of them were great,” Celtics coach Doc Rivers said of Perkins, Wallace and Davis, who turned the self-proclaimed Man of Steel into an ordinary citizen.

“You know, and I’ve said this earlier, I think Dwight is mislabeled. He doesn’t have to score to create offense,” Rivers said. “I think everyone keeps looking at Dwight’s numbers and they say he has four or six points that he didn’t have an offensive impact. But the reason why he has an offensive impact is he draws so much help, you have to double team him, he gets offensive rebounds and he throws them back out for threes.”

Rivers added: “So, we did a good job as far as his scoring numbers, but I thought we could do a better job quite honestly in helping on Dwight and getting back. I think they did get some looks that we have to do a better job. You think about the J.J. Redick drives. Those are all Dwight Howard generate because no one wants to leave Dwight and it’s allowing their guards to get to the basket.”

A very diplomatic statement by Rivers but, the fact of the matter is, the Celtics know they can defend Howard one-on-one and it’s a puzzle Magic coach Stan Van Gundy needs to solve.

“They pretty much guarded everybody one-on-one and we weren’t able to score one-on-one,” Van Gundy explained. “The biggest problem on the offensive end was clearly the turnovers. We said it going in, It’s what did in Cleveland in the last series. They’re very physical, very tough defensively. We’re not giving ourselves a chance to win with 18 turnovers.”

Van Gundy noted that he needs to figure out a better way to attack the Celtics defense, but it starts with his franchise center to be more efficient when he gets his opportunities in the paint.

“We’ve gotta be able to handle the ball better against them. We’ve gotta get better ball movement. And we either gotta be able to convert better in the paint or we’ve got to draw help and make passes. It’s one or the other,” Van Gundy said. “I thought we got the ball into the paint, both on drives and some paint catches for Dwight, but we were not very efficient.”

After struggling with fouls in the early rounds, Howard vowed that he wouldn’t let anything or anyone throw him off his game. One game into the conference finals, Howard is already way off track.