How quickly things can change.

A week ago, the Orlando Magic was the sexy pick to represent the East in the NBA Finals based on the way they dismantled the Charlotte Bobcats and Atlanta Hawks.

Today, the Magic are on the brink of elimination and appear to be surrendering to the Boston Celtics, who have completely undressed the Magic in the 2010 Eastern Conference finals thanks to a stifling defense that is reminiscent of their championship run in 2008.

Is Orlando’s season over? According to Dwight Howard, his team seemed despondent and defeated in Game 3, and has not shown any signs of wanting to extend this series. The Celtics held the Magic to 39% shooting and 28% from behind the arc in their 94-71 rout in Boston to take a commanding 3-0 lead in the best-of-seven series. 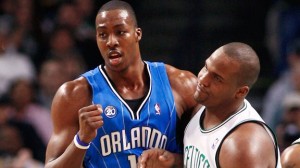 Glen Davis (right) and the Celtics have kept Dwight Howard in check in the 2010 Eastern Conference finals. (NBAE/GETTY IMAGES)

Howard, Jameer Nelson and Rashard Lewis, all key cogs during Orlando’s eight-game playoff winning streak, have been handcuffed by the great Celtics defense.

Howard, aka Blankman, has once again smeared the Superman brand with his pathetic performance in the conference finals. He was held to seven points in Game 3 and is shooting just 45% from the field (he shot 84% in the previous series against the Hawks).

The biggest reason why Orlando has had a difficult time scoring (83.6) against Boston’s defense is Blankman’s ineptness in the low post. Because Blankman can’t beat Boston’s single coverage, the Celtics’ perimeter defenders have been able to attach themselves to the Magic shooters, running them out of the 3-point line every chance they get.

Nelson, who won his one-on-one battles with Charlotte’s Raymond Felton and Atlanta’s Mike Bibby, has been severely outplayed by Boston’s Rajon Rondo.

Celtics head coach Doc Rivers targeted Nelson as the key to the whole series, and Boston has done an excellent job in limiting his kick-outs to his shooters and funneling him to the teeth of the defense where his 5-foot-9 frame becomes an issue. Nelson is making only 38% of his shots from the field and under 30% from threes. He also has just seven assists in three games.

And then there is Lewis, the poster boy for Orlando’s struggles on offense. Boston’s suffocating defense, led by Kevin Garnett, has made Lewis disappear and Magic coach Stan Van Gundy, who vowed to get Lewis more shots after Game 1, has not been able to get his forward more involved.

No team has ever come back from an 0-3 hole in the NBA playoffs, so the odds are stacked against the Magic. Losing the first two games at home was crippling and, after tonight, don’t expect to see Orlando again until October when the 2010-11 season begins.