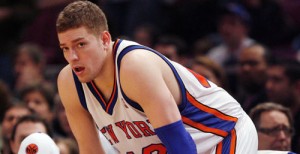 David Lee, who was traded from New York to Golden State during the offseason, injured his finger during Team USA's practice. (UPI)

This year’s U.S. men’s national team looks younger, faster and more athletic, but not necessarily better than the “Redeem Team” two years ago.

For one, the team that will represent the United States in the 2010 FIBA World Championship in Turkey have a glutton of talented guards but lack quality big men. And that was before New York Knicks forward/center Amare Stoudemire decided to drop out of the program a day before training camp started in Las Vegas and Phoenix Suns center Robin Lopez opted not to play because the knee injury he suffered during the regular season is not 100 percent.

Then, during Tuesday’s workouts, Golden State Warriors forward David Lee may have dislocated the middle finger on his non-shooting hand. According to reports, Lee injured the finger when he went up to block a shot and jammed it against the bottom of the backboard.

That’s three big guys out and Team USA hasn’t even completed a full week of practice.

Team USA’s frontcourt was getting so depleted that JaVale McGee, the young center of the Washington Wizards, has been asked to take part in team activities as a backup plan. McGee is coming off a very impressive outing at Vegas Summer League, but there’s a slim chance he’ll make the final cut.

“With those guys missing, we’re gonna have to play much better as a team. We have great guard play, but we’re a little short on bigs,” Lee said during Tuesday’s workout.

“We have guys who can play multiple positions. Rebounding is going to be huge for us,” said Lee, who may be asked to play some center if he makes the squad. “It’s pretty obvious that our advantage is going to be our quickness, our length and our explosiveness. That’s something we’re gonna have to utilize and spread the floor like the past Olympic team did before to create driving lanes and defensively really pack it in and find a way to rebound the basketball.”

“The interesting part for me will be the bigs, to see how it plays out,” said Colangelo.

Durant is an absolute lock to make the team, and there’s a good chance Billups will join him having been a part of the program back in 2008 when Coach K and Co. prepared for the Beijing Olympics. But after those two, it is anyone’s guess. Here are the names of the players invited to the USA Basketball training camp in Las Vegas: