While preparing for his agility test at Friday’s NBA Draft Combine at Chicago’s Attack Athletics Training Center, John Wall saw Washington Wizards head coach Flip Saunders standing a few feet behind him. Wall knew he needed to do something to make a big impression on his potential NBA coach.

After a somewhat disappointing 30-inch mark in the no-step vertical, the 2010 SEC player of the year from the University of Kentucky gathered himself for his two-step vertical test and then nearly jumped out of the gym, touching all but four sticks on the vertical bar. The 19-year-old, 6-foot-4 point guard then clocked in with the fastest 25-yard run (3.1) and turned in a impressive showing in the other agility drills.

Wall’s 43-inch vertical and Usain Bolt-like speed certainly got the attention of the other players at the combine, including Ohio State’s Evan Turner and Kansas’ Xavier Henry. It was a loud message to the rest of the field that Wall is, and should be, the No. 1 overall selection in next month’s NBA Draft. 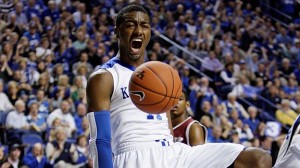 Wall was simply head and shoulders above anyone else during the agility drills of the combine, and he did so without the benefit of a warm-up. He decided to pass on the fullcourt workouts at the suggestion of his agent, a decision that was shared by other top prospects such as Turner, DeMarcus Cousins (Wall’s teammate at Kentucky), Wake Forest’s Al-Farouq Aminu, Georgetown’s Greg Monroe and Kansas’ Cole Aldrich.

Turner had a decent showing in the agility drills, but it definitely wasn’t his strength. The 6-7 guard-forward glided through the drills without breaking much of sweat, while Wall went hard on every turn. That’s the biggest difference between Wall and Turner. Wall is in attack mode from the moment he sets foot in the gym, while Turner is more laid-back.

Here’s the dilemma for the Wizards, who hold the rights to the top pick in the draft: Do they take Wall or Turner? Do they prefer a Ferrari over a Bentley?

“John is an extraordinary athlete. I think he tested the highest in all of the testing out here,” Saunders told ESPN’s Andy Katz. “But they’re both phenomenal players. Evan is the same way. We can’t go wrong whoever we take as far as the number one pick. We’ll probably talk to them and watch some film with them with our top guys and see how they comprehend the game. We’ll work them out as far as our game is geared towards, pick-and-roll offense and pick-and-roll defense, and see how they understand some of those things.”

As far as each player’s transition from college to the NBA, Saunders sees both as having a huge impact.

Although Saunders and the Wizards won’t say it publicly because the NBA wants to add a little drama to the process, they will likely use the No. 1 pick on Johnathan Wall, who told Sports Illustrated writer Grant Wahl that he wants to be the greatest point guard ever.

Lofty goals for a young player, but certainly well within reach.