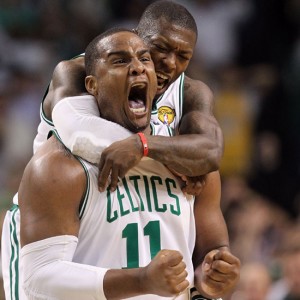 Nate Robinson hops on Glen Davis' back after he scored a layup in the fourth quarter that gave the Boston Celtics a six-point lead. (NBAE/GETTY IMAGES)

Game 4 of the 2010 NBA Finals turned into the Nate Robinson & Glen Davis Show.

Little Nate and Big Baby were a huge hit on Thursday night both during the game and afterward, pumping a different vibe into this hotly contested series that is now tied at 2-2 with still one game left to play in Boston.

The defining moment of the game occurred early in the fourth quarter, and Big Baby had a big part in it with a supporting role from Little Nate.

There was a loose ball on the Lakers’ end and Davis beat Jordan Farmar to the ball and flipped it to Ray Allen to start a Celtics fastbreak. Allen penetrated and fed Tony Allen near the basket, but he missed the easy layup. Fortunately for Boston, Davis followed the play and was able to grab the offensive rebound and scored, plus a foul, to put Boston ahead, 70-64, with 8:22 remaining in the game.

It was a sequence events that summarized Boston’s night and may have injected some new life into the dragging Celtics, who were struggling mightily against the Lakers’ set defense until the final quarter when the bench gave them a big boost.

Davis was so jacked up after his basket he screamed at the top of his lungs. Then Robinson jumped on Davis’ back and both men proceeded to perform some serious primal yells, and that’s when Davis did something that all big babies do – drool.

“Sorry about that. Did I catch you with something?” Davis told Nichols.

Celtics coach Doc Rivers claims he has seen the Davis Drool before, and it usually occurred after a long run in practice.

What began as a nightly presser turned into a comedy routine between Chris Rock and Eddie Murphy … oops, I mean Glen Davis and Nate Robinson. When asked if he knew that Robinson was riding his back as he was slobbering his way to midcourt to celebrate, Davis turned to his bench buddy and joked: “You were on my back? I didn’t feel that.”

And Robinson’s response was, “Yeah. We’re like Shrek and Donkey.”

Davis and Robinson – aka Shrek and Donkey – spearheaded an energetic Boston bench that scored 21 of Boston’s 36 points in the fourth quarter that enabled the Celtics to win Game 4, 96-89.

“They really stepped on in in the fourth quarter,” Lakers coach Phil Jackson said. “Their bench outplayed us. But even with all that, at the end of the game, we had our shot.”

When Jackson was pressed on the Lakers’ defensive strategy on Robinson and Davis, the Lakers coach replied: “Nah, I’m not going to talk about that.”

Jackson’s refusal to answer a reporter’s question regarding Boston’s new dynamic duo was brought up during Davis’ and Robinson’s time at the podium, and Davis was quick to submit a witty reply.

Davis took advantage of a Lakers interior defense that only got 12 minutes from 7-foot center Andrew Bynum, who started the game but did not start the second half. Bynum had just two points and three rebounds, and was clearly bothered by his ailing right knee, which swelled up after Game 3.

“I just felt like a beast. Really, I’m just being honest,” Davis said. “I feel like I couldn’t be denied.”

Davis added: “I don’t think that what we did today was really on the scouting report. A lot of things that we did was just will and determination, and seizing the moment.”

If Davis brought the muscle then Robinson brought the speed to the game. When the game got stagnant and starter Rajon Rondo needed a break, Rivers turned to Robinson for a spark and the former New York Knick provided the Celtics with some much needed outside punch.

“I just want to bring energy. The more energy I bring, I get the crowd involved and my teammates,” said the 5-8 guard, who scored 12 points in 17 minutes. “You can’t scout energy, no matter what. Something my college coach used to say that the more energy you bring you’d be surprised what the outcome of the game would be. Play as hard as you can for as long as you can. That’s what we try to do. Play through the calls, play through everything.”

Robinson added: “When you’re playing like that you just want to play as hard as you can and as long as you can, and then you want the starters to go back in so they can carry us home.”

Trailing by two at the end of the third quarter, Rivers went to his bench mob to start the fourth quarter and he didn’t go back to his starters until with about three minutes left. Davis, Robinson, Tony Allen and Rasheed Wallace joined starter Ray Allen on the court and the unit turned a two-point Lakers lead into a seven-point Celtics advantage in four minutes.