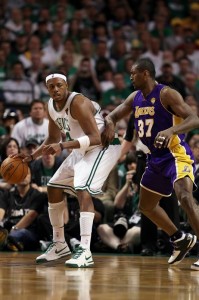 Charley Barkley can, at times, be a little bombastic when it comes to his basketball assessments for TNT and NBATV, but his opinion of Ron Artest in the 2010 NBA Finals is dead on.

Barkley criticized the Lakers forward for being absent offensively for much of this series and his lack of productivity is hurting the Lakers on the offensive end. He has claimed all season that the Lakers are different team with Artest because he doesn’t provide the same consistent outside shooting that Trevor Ariza did last season, especially during the playoffs when Ariza made key shots during the Lakers’ championship run.

“I’ve said this all season, what ever happens with the Lakers they still miss Trevor Ariza,” Barkley said during NBATV’s Finals postgame show. “You go back to the Orlando series in The Finals, he single-handedly won Game 4 making a bunch of great plays down the stretch. Ron Artest has not been able to score enough to offset that and he’s not stopping Paul Pierce.”

To say that Artest is struggling offensively in The Finals is an understatement. He is averaging eight points a game, shooting 32% from the field and 28% from behind the 3-point line. By comparison, in 23 playoff games last season, Ariza averaged 11 points per game and shot 47% from 3-point range. 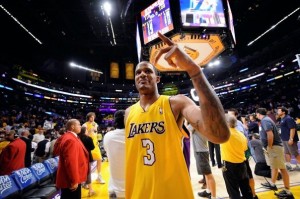 Trevor Ariza was a key member of the Lakers' 2009 championship team. (ASSOCIATED PRESS)

“Ron Artest is giving them absolutely nothing in this series to be honest with you,” Barkley said after the Celtics won Game 5, 92-86, to take a 3-2 lead in the best-of-seven series.

Sunday night may have been Artest’s worst playoff game as a Laker. He scored just seven points, was 2-for-9 from the field in 34 minutes and missed two crucial free throws late in the fourth quarter that could have altered the outcome of the ballgame. Also, Artest made some major defensive lapses late in the game that allowed the Celtics to maintain their lead.

Even Lakers coach Phil Jackson admitted that Artest had his opportunity to impact the game late and he couldn’t come through.

With 46 seconds remaining in the game and the Celtics clinging to an 87-82 lead, Derek Fisher somehow stole the tip from Kevin Garnett in a jumpball situation near the Celtics’ basket and Artest found himself on a breakaway. Artest was grabbed from behind by Paul Pierce and forced him to make two free throws. He missed both and Pierce somehow ripped the ball out of Bryant’s hands to gain possession and Boston was able to knock down enough foul shots down the stretch to secure the victory.

“They broke the game open in the third quarter, and it was a struggle for us to get back in the ballgame. Sequences of plays, couple of turnovers by Kobe and run-outs, created a 10-point gap that we really struggled to get back in the game,” Jackson said. “Ron had an opportunity. Unusual situation … Fish elevated, beat Garnett to the [jump] ball on the tip, which is kind of unusual and they weren’t ready for the run-out. But we couldn’t make the play on that.”

Artest is struggling so much offensively that his defense is beginning to suffer. After holding down Pierce through the first three games of the series, Artest appear to be losing his grip on his matchup with the Celtics captain in the last two games. Pierce scored 19 points in Game 4, a game won by the Celtics, and then in Game 5 Pierce got going early and finished with 27 points on 12-of-21 shooting.

Aside from allowing Pierce to get going offensively, Artest failed to foul Rajon Rondo twice late in the game that would have put a poor foul shooter on the line.

With 40 seconds left, Garnett inbounded the ball to Pierce near the sideline and Pierce found Rondo cutting toward the basket. Artest was trailing Rondo on the play and could have grabbed Rondo to prevent a layup, but he didn’t. Rondo’s reverse layup made it 89-82.

Then, with 28 seconds remaining, Rondo had the ball in the backcourt and Artest had another opportunity to foul him but whiffed. Rondo got the ball across halfcourt and the ball found its way to Ray Allen (a 90% free throw shooter), who iced the game with 18 seconds left.

If the Lakers are going to win the NBA championship, Artest needs to lock down Pierce and must make enough outside shots to loosen up the Celtics defense. If he doesn’t, the Lakers may regret not re-signing Ariza.