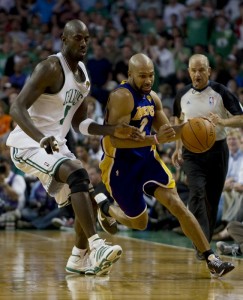 Derek Fisher drives past Kevin Garnett at halfcourt on his way to the basket with under a minute left in the fourth quarter. (NBAE/GETTY IMAGES)

Too old, too slow, too limited athletically and too short.

Derek Fisher has heard all the criticism, but the two aspects of his game that never gets questioned are his heart and his toughness, physically and mentally. Fisher, who is listed at 6 feet but is probably closer to 5-10, has such a strong belief in himself it allows him to play big in big moments. That was definitely the case in Game 3 of the 2010 NBA Finals when the 35-year-old Lakers guard – and one of the most highly respected men in the Association – stepped up in the fourth quarter to help the Lakers defeat the Boston Celtics, 91-84, at TD Garden.

Fisher scored 11 of his 16 points in the final quarter and was 5-for-7 from the field in the fourth. He was 1-for-5 and had just five points through the first three quarters. He also played exceptional defense on Ray Allen, who torched the Lakers for a Finals record eight 3-pointers in Game 2. But in Game 3, Allen scored just two points and was 0-for-13 from the field and 0-for-8 from behind the arc.

“He’s been criticized quite a bit for his age. It’s a huge thrill for him and for all of us to see him come through in these moments. Truthfully, he’s done it over and over again. It’s his responsibility to our team to do these things,” Kobe Bryant said of Fisher, his longtime teammate and Laker co-captain.

“I went through years where I didn’t have him,” Bryant continued. “I had point guards nowhere near his caliber in leadership and shot-making ability and toughness. It changes things drastically for me personally. Now, I don’t have as much responsibility as I have when we wasn’t there.

“He’s the heart and soul of this team, as simple as that.”

Bryant, who led the Lakers with 29 points in Game 3, also credited Fisher for pulling the team together after the Celtics wiped out a double-digit lead at halftime and trimmed L.A.’s lead to a single point in the fourth quarter.

“Derek is our vocal leader. He’s a guy that pulls everybody together. He’s always giving positive reinforcement, and I’m the opposite. We play off each other extremely well. That’s what he does, that’s what he’s been doing and he has a knack for saying the right thing at the right time,” Bryant said of Fisher, who may be the only guy on the Lakers, other than coach Phil Jackson, who can pull Bryant aside and reel him in when he’s hurting the team.

“He’s the only one I listen to. Everybody else is a bunch of young kids,” Bryant admitted.

When the Lakers’ offense got a little stagnant late in the third quarter and early in the fourth quarter, Bryant and Fisher decided to go away from the triangle offense and played more side pick-and-rolls to free up Bryant and apply a little more pressure on the Celtics’ defense early in the shot clock.

“We did a lot with Kobe in that third quarter, which really got us in trouble. In the first half, we were much better with our execution and ball movement. It makes it hard for their defense when we’re moving the ball and we’re moving players. In that third quarter, we weren’t getting into our offense fast enough, which left Kobe having to do some things at the end of the clock and that’s not good, ” Fisher explained. “We saw some things we could accomplish by playing a little two-man game between Kobe and myself.

“When Kobe sets a screen his man is gonna be very reluctant to help off of him, so it allows somebody else to get in the interior of their defense. Couple of times I made a pass or two, and a few other times I was able to knock down shots.”

Fisher knocked down five huge shots in the fourth, none bigger than the one he made with under a minute remaining in the game.

With the Lakers ahead 84-80 with 56 seconds left, Ray Allen missed a 3-point shot from the corner and Fisher grabbed the rebound. Instead of holding the ball in the backcourt, Fisher wisely pushed the ball up the court and caught the Celtics napping on defense. Once Fisher got past Kevin Garnett at halfcourt, he noticed that no one was protecting the basket so he drove all the way to the rim on a one-on-four fastbreak, went up against three defenders, got fouled by Glen Davis and banked in a layup with 48 seconds left. His 3-point play made it 97-90 and essentially put the game out of reach.

“We have to do a better job in closing quarters and closing the game,” said Celtics point guard Rajon Rondo. “All five guys out there made a mistake when the score was 84-80, and Fisher made a great play. We didn’t get back in transition. That play won the game.”

That play may have sealed the game for the Lakers, but the Celtics may have lost this game long before Fisher’s layup. Boston got down by as much as 17 points in the first half and struggled to score points because Paul Pierce got into early foul trouble and Allen suffered through the worst shooting night of his playoff career.

Pierce played 33 minutes and finished with 15 points, three below his season average. He made five of 12 shots for the game, but at one point was just 2-for-9.

It was a very tension-filled game in a highly competition NBA Finals between two storied rivals, and an emotional Fisher had to fight back tears when he spoke to ABC’s Doris Burke after the game.

“I love what I do and I love helping my team win,” Fisher said. “Even when things maybe aren’t going the way I’d like them to go for reasons I can’t control, I still pretty much keep my mouth shut and keep doing my job and remain faithful that things will come around when they need to. To come through tonight again for this team, you know, 14 years in after so many great moments it’s always quite surreal and quite humbling to experience it again and do it again. Just like being a kid … you never get tired of that candy.”

Fisher – who is now two victories away from winning his fifth NBA championship ring, the most of any active player in the league besides Kobe – noted that having trust within an organization is the formula to success.

“I was reading a book that talked about companies and businesses that they try to do to keep everybody focused on what the goal is,” Fisher said. “I recently have been reading a lot about trust. And that’s basically what we’ve talked about. Trusting each other, trusting the triangle offense, trusting our coaches, trusting that when you get into foul trouble the guy next to you or behind you can come in and get the job done and that there’s nothing to fear. Just go out there and give everything you have and trust that that will be enough. It was enough tonight, and I’m hopeful that it will be good enough [for Game 4].”