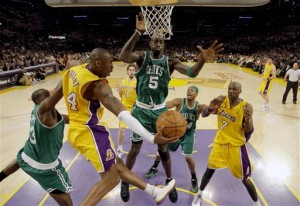 The Los Angeles Lakers and Boston Celtics met in the 2008 NBA Finals, a series won by Boston in six games. (ASSOCIATED PRESS)

When Mike Bresnahan of the Los Angeles Times asked Phil Jackson if the memory of the 2008 NBA Finals still lingers, the Lakers coach responded with a sarcastic quip. “I forgot. I have amnesia,” Jackson claimed. “What year was that now? 2-8? Ok.”

Jackson was obviously kidding about not remembering anything from the ’08 Finals. He certainly hasn’t forgotten the terrible feeling he had when he walked off the TD Garden floor in Game 6 when his Lakers were destroyed by 39 points by the Boston Celtics – the largest margin of victory in a series-clinching game in the playoffs. He certainly hasn’t forgotten how the Celtics big men manhandled his frontline. And he definitely remembers Game 4 when the Lakers wasted a 24-point lead and lost at home.

The 2008 Celtics and the 2004 Detroit Pistons are the only two teams to beat Jackson in the NBA Finals, and the Zen Master – owner of 10 NBA championship rings – admitted that he hates to lose, especially in The Finals.

“There’s nothing worse than to lose in The Finals. It’s about as low as you can get,” said Jackson. “I’ve done it twice now, so I know it’s a real difficult summer after that.”

Just moments after the Lakers defeated the Phoenix Suns in Game 6 of the Western Conference finals, all the attention and focus shifted to the much anticipated and very attractive Lakers-Celtics showdown in the 2010 NBA Finals, and Jackson couldn’t resist bringing up an unexpected encounter last summer involving one of Boston’s Fantastic Four.

“After the 2009 Finals, I ran into [Paul] Pierce at a complex where my daughter lives in L.A. I said to him ‘Get it back. I want to meet you in The Finals,’ ” Jackson recalled. “So, here it is. Almost a year later. We have an opportunity to renew this rivalry.”

When it comes to great rivalries in sports, few compare to the Lakers and the Celtics.

The two basketball superpowers have combined to win 32 NBA championships – the Celtics have 17 and the Lakers 15. Boston has reached the league’s ultimate game 21 times while the Lakers have been part of it a record 31 times.

“It’s a matchup that is very easy to talk about,” said Kobe Bryant, whose Lakers are facing the Celtics for the second time in three years in The Finals. “They are a lot of things people can write about. It’s a sexy matchup. So, we’re looking for to the challenge and looking forward to the test.”

The NBA as we know it now was built on the foundation laid down by the great Lakers-Celtics battles in the 1960s with legendary figures such as Red Auerbach, Bill Russell, Bob Cousy, Jerry West and Elgin Baylor. The league then experienced an astronomical growth in popularity during the 1980s thanks to headliners such as Pat Riley, Magic Johnson, Kareem Abdul-Jabbar, Larry Bird, Kevin McHale and Robert Parish.

If it were not for the Celtics, the Lakers would have 24 world titles and a New York Yankees-like dynasty. The Lakers and Celtics have met 11 times in The Finals with Boston walking away with the trophy on nine occasions. The last meeting came in the 2008 Finals and the Lakers are still seething over how it ended.

For two years, the Lakers have been waiting to get their shot at the Celtics, a team who taught them a lesson in physicality and mental toughness. The Lakers feel their have overcome their deficiencies and they can’t wait to show the hated Celtics how much they have improved from the last time they met in the playoffs.

“We’re looking forward to the challenge,” Bryant said. “The last time we played them it was a great learning experience for us. It taught us what it takes to be a champion, with the defensive intensity that they play with and the tenacity that they play with. We learned a great deal in that series.”

So, did L.A. secretly hoped to play Boston in The Finals because they have a score to settle with the Celtics? “I don’t give a damn who we play. Doesn’t matter to me,” Bryant said. “The challenge is to win a championship, and the Celtics are in the way.”

Bryant may not say it publicly but he is thrilled to be playing the Celtics. He knows he can cement his legacy by conquering the team with a storied history, and he can put more distance between himself and the rest of the field by taking down a Boston team that knocked out Dwyane Wade, LeBron James and Dwight Howard in this year’s playoffs.

But it won’t be easy.

The Celtics own one of the league’s top defenses and they have not lost a series since Kevin Garnett came on board on 2007. Boston employs a very physical but cerebral defensive plan. The scheme begins by loading up one side of the court and keeping all the opposing perimeter players away from the paint. Because the Celtics flood the paint the tendency is to shoot 3-pointers, which is exactly what they want you to do and they have the athletes who can close out on shooters.

“We’re playing a different style of ball now,” Bryant said. “We’ve had three series where every single one has been different. Now we’re going into this where the level of physicality and intensity will be at an all-time high. We’re not looking at games in the 115, 110-point range.”

The Lakers are certainly well equipped to handle any style, having faced three different philosophies in their path to the NBA Finals. They played a quick, athletic team in Oklahoma City, a rugged but methodical Utah squad and a high-scoring, loose bunch from Phoenix.

But going from Phoenix’s loose zone defense to Boston’s air-tight man-to-man concept will be a big adjustment for the Lakers, despite their familiarity with the Celtics.

“I don’t know if it’ll be a tough transition, but it’ll definitely be different,” said Lakers co-captain Derek Fisher. “If you really breakdown the Celtics defense, it’s basically a zone defense.”

The great Celtics’ defense vs. the great Lakers’ offense. It’s a match made in basketball heaven.