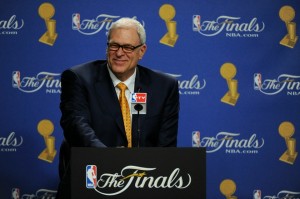 Phil Jackson complaining about officiating during an NBA playoff series is about as predictable as the sun rising in the east and setting in the west.

During his regular postgame news conference, Jackson was asked what he thought of the officiating in Game 2 and he wasted little time in planting the seed for the rest of the series. Jackson began with, “It’s gonna be that way from game to game, and I think a lot of it is about who comes out aggressively and does the right thing out there at the very start of the ballgame.”

That was certainly a diplomatic commentary from Jackson, but he sharpened his stance later on.

Jackson had three major issues: 1) how Ray Allen frees himself for his 3-pointers, 2) why Doc Rivers was allowed on the court to call timeout, and 3) the questionable foul calls on Kobe Bryant.

When the Lakers coach was asked what he thought of some of the foul calls on his star player, who picked up his fifth foul early in the fourth quarter, he said: “I wasn’t happy with the foul calls. Those were unusual calls. It really changed the complexity of this ballgame.”

I guess Jackson wasn’t satisfied with the 41 foul shots his team attempted in Game 2 compared to Boston’s 26.

One thing that definitely didn’t sit well with Jackson was the way Allen torched the Lakers with eight 3-point shots in Game 2, an NBA Finals record. But it wasn’t the end result that burned Jackson, it was the initial process that irked him. Jackson believes it will be difficult to stay with the Celtics’ shooting guard when he’s allowed to move freely around the screens.

“When they take away any bumps when Fish is trying to make him divert his path and they don’t allow him to do that and they call fouls on Fish, that really gives him an opportunity to take what ever route he wants to take off on the pickers. That makes it very difficult,” Jackson explained.

“We just have to adjust to the ballgames on what the referees would call,” Jackson continued. “Are they going to allow us to take direct line cuts away from him so he has to divert his route or let him run through Fish and get a foul called on Fisher? Then it makes a totally different type of ballgame. Then Fish has to give him the route he wants to run in and he’s gotta play from behind all the time. That’s the adjustment we’ll make in this series. But he had a great game.”

Then, Jackson turned his attention to Rivers’ timely timeout late in the fourth quarter that allowed the Celtics to avoid an eight-second backcourt violation. “I don’t know if you can do that or not. I don’t think that’s legal,” the Lakers coach pointed out. “Coaches have to stay on the sideline, they’re not supposed to stay on the floor. It looked like he was shot out of a starter’s block.”

It looks like the Zen Master has fired the first meaningful shot at the referees in the 2010 Finals.