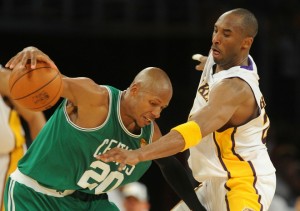 Celtics shooting guard Ray Allen knocked down eight of 11 3-pointers against Kobe Bryant and the Lakers in Game 2 of the 2010 NBA Finals. (NBAE/GETTY IMAGES)

Ray Allen set an NBA Finals record for most 3-point shots made in a game. He made eight of them, and all of them barely hit the rim. It was the kind of night shooters dream about. Catch the ball, get your feet set, release, and … SPLASH! Those who can shoot know that feeling. Those who can’t? Well, you can at least dream about it.

Allen’s jump shot was so pure and wet on Sunday night that it looked like Staples Center was the backlot of a Hollywood movie set and Allen was reliving his role as Jesus Shuttlesworth in Spike Lee’s joint “He Got Game.” Though Allen made it look easy, it certainly wasn’t. Try making seven 3-pointers in a row from 23 feet in an empty gym without a hand in your face. It might take you all day. Allen drained seven in a row in the first half against the best team in the league at defending threes.

“There’s so much going on out there from great screens being set to misdirection plays, making sharp cuts, and offensive rebounds – that’s best time to get a 3-point up. I thought they did everything they could to keep me from shooting threes working tirelessly, but we were setting great screens and getting to my spots,” said Allen, who finished with 32 points on 11-of-20 shooting and was a blistering 8-for-11 from behind the arc.

“Starting the game off, you don’t want that first shot to be a 3-pointer. You want to work your way into the game. But if it has to be, it has to be. I try not to turn a shot down when I’m open for sure.”

And the Celtics are glad Allen didn’t turn down any of the 3-point looks he was given because Allen’s shooting exhibition was a big reason why the 2010 NBA Finals is now at 1-1.

Allen felt he never got a chance to make an imprint in Game 1 because he barely played, and he made sure things were going to be different in Game 2.

“The other night was frustrating. It was tough trying to adjust to the referees and I was watching from the sidelines. I just tried to root them on,” Allen said of his disappointing Game 1, a game in which he played only 27 minutes because of fouls. In Game 2, Allen played 43 minutes and was never in serious foul difficulty.

“Physically I felt great. I was getting to the spots that I need to, just never really got into a great rhythm,” Allen explained. “Tonight I was focused on adjustments to Kobe [Bryant] attacking, being in position before I could get back and help my teammates out. The bigs set great screens for me, [Rajon] Rondo pushed the ball in transition and we got a lot more fastbreak opportunities. We got stops so we were able to run.”

Allen and Rajon Rondo were instrumental in helping the Celtics build a 14-point lead in the first half, and even though the Lakers caught them in the second half it established a fast tempo the Celtics felt comfortable playing and didn’t allow the Lakers to set up their defense and pack the paint.

“Can’t say enough for what Ray did for us tonight, especially in the first half. He carried us the whole way,” said Rondo, who recorded a triple-double with 19 points, 12 rebounds and 10 assists. “We played on our edge but Ray held us through it and took over the game. Me, personally, it was fun to watch. I was just trying to get him the ball.”

Allen added: “The ball bounced more in our favor. I think we had more activity in this game, we had more energy. We fought harder. There were a couple of threes where the ball bounced kinda funky and we ended up getting it. We fought and got those extra possessions this time, and early in the game we got into transition. I got a couple of threes early and nothing was rushed, basically.”

Boston tried to get Allen more looks in the second half, but the Lakers made the adjustment and held him to only three 3-point attempts in the last two quarters.

“They did a better job of guarding him,” Rivers said. “The start of the third quarter they were scoring. By them scoring that meant we were not running anymore, and we couldn’t get [Allen] in transition. We wanted to establish Ray and Paul coming out of halftime, and we got into the same pace the first six minutes of that third quarter that we were in Game 1. We were walking the ball up the floor and we lost our tempo.”

Boston’s starting backcourt certainly made up for the lack of productivity from their their frontcourt, particularly Paul Pierce and Kevin Garnett.

Pierce suffered through a rough shooting night, going 2-for-11 and finishing with just 10 points. He did get to the foul line six times but most of them came in the first half. Garnett vowed to bounce back from a bad Game 1, but it got even worse for him in Game 2: six points, four rebounds and five fouls in 23 minutes.

“It was a team effort. A lot of guys stepped up,” said Pierce. “Obviously Ray had the shooting going for us all night long, so we had to play through him. Rondo had it going. If we had two guys who had it going then other guys can fill in and play their roles, and we feel like we give ourselves a chance.”

Thanks to Ray Allen, Boston now has a chance in this series.