Phil Jackson got his message across earlier in the week and now it’s Doc Rivers’ turn to bellyache about NBA officiating.

During his Wednesday morning press conference, nearly 12 hours after his Boston Celtics lost, 91-84, to the L.A. Lakers in Game 3 of the 2010 NBA Finals, Rivers offered his thoughts on Derek Fisher and the way the veteran Lakers guard plays defense, and much of Rivers’ assessment wasn’t very complimentary.

When Rivers was asked how Fisher got around the screens and held Ray Allen to 0-for-13 shooting in Game 3, Rivers replied: “Besides flopping? He doesn’t do a lot, actually.” 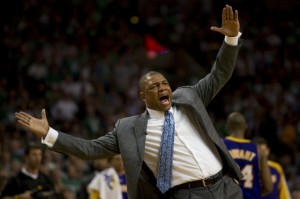 After Boston’s win in Game 2, Jackson complained about how Allen got away with bumping Fisher out of his spot as the Celtics’ shooting guard initated his activity through the gauntlet of screens.

Allen torched the Lakers for a Finals record eight 3-pointers on Sunday, but went 0-for-8 from behind the arc Tuesday night. What changed?

“I thought [Fisher] got away with a lot last night,” Rivers explained. “I thought there was a lot of holding going on and a lot of flopping going on. Finally he sold that last one. But he’s good at. He’s always been good at it, we knew that going into the series. He’s one of the best charge-takers in the game. It’s always been that.

Jackson’s grumblings may or may not have influenced the officials, but it certainly ignited another debate. It’s an annual event that happens every spring when the stakes are higher and the games are more competitive. The losing coach seemingly always has something negative to say about game officials, and Rivers certainly knows the drill and is fine with it. He can play the “blame game,” too.

“I think [Phil is] as good, but we’re all pretty good at it,” Rivers said. “I hope that if Phil Jackson said something the day before and it happens, I hope that has nothing to do with the officials. I just hope that doesn’t, and I don’t think it does. But last night, you know, it’s funny because I thought they got away with more on the moving screens.”

Rivers thought the Lakers were given free reign to shift their position on their pick-and-rolls, which compromised the Celtics’ defense. Rivers says he has already filed an official complaint to the league regarding the non-calls.

“We got called for one last night, but I don’t think the Lakers were called for any moving picks,” Rivers said. “I don’t send in [tapes] a lot usually to the league, but I sent in a lot this morning.”

NBA referees have always heard the criticisms from players, coaches, owners and fans over the years, but it was multiplied by 10 after the Tim Donaghy incident and Commissioner David Stern hands out fines like candy to anyone who utters anything bad about his crew.

Rivers believes part of the problem stems from the fact that there are three referees during games and every player’s movement is unnecessarily scrutinized.

“When I played, it was only two officials. Back then they just called the game what they saw. Now, it’s so much more technical,” Rivers said. “In some ways it’s better, in some ways it’s not because officials won’t call it when it’s not in their area.

“But it’s tough. The game is more athletic, the game is faster and it’s brutal. We’re hard on them, everybody is hard on them. It’s a very difficult game to call. But what we all want is consistency. It’s tough to get to that, but that’s what everybody wants.”