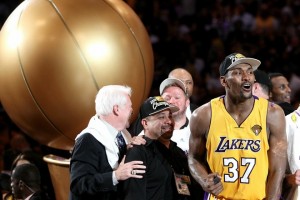 A lot of people may not know this but Ron Artest is a loyal guy to the core. He has never forgotten where he came from (say Queensbridge!) and he goes out of his way to thank all those people who have helped him along the way – including his therapist.

During his proudest moment as a basketball player, just minutes after having a game for the ages in the deciding game of the 2010 NBA Finals to capture his first NBA championship, the ever unpredictable Ron Artest recalled his time with the Indiana Pacers and managed to recognize his former teammates and former managers Donnie Walsh and Larry Bird, saying how disappointed he was that he couldn’t share his greatest moment with them.

“When I was younger, I bailed out on my Indiana team,” Artest admitted after the Lakers’ 83-79 victory over the Boston Celtics in Game 7.

“I was so young, so egotistical and I bailed out on Donnie, Larry, Jermaine [O’Neal], [Jamaal] Tinsley, [Jeff] Foster, who never bails out. He just fights for you, for your team. Steve Jackson, who already had a ring, and he continued to fight for us,” Artest continued. “Sometimes I feel like a coward, you know, when I see those guys because, now that I’m on the Lakers, I had a chance to win with you guys. I never thought God would put me in this situation because of that.”

Artest feels that he owed the Pacers something after the ugly incident he ignited 16 years ago at The Palace in Auburn Hills, Mich., where he infamously went into the stands with Jackson and started an all-out brawl that still haunts the league to this day.

He may feel like he let down the Pacers but he certainly didn’t disappoint his new team, the L.A. Lakers, with the way he performed in Game 7 of The Finals against L.A.’s chief rival.

In the biggest game of his career, Artest played a superb all-around game, scoring 20 points, grabbing five rebounds and recording five steals in 46 minutes. And his defense throughout the series on Celtics forward Paul Pierce was top notch.

“I want to thank Dr. Santi. She would come and help me relax in these moments because I’m not good at these moments,” Artest admitted. “And I know that about myself. So, what do I do to be good a these moments? We figured it out. I needed some type of way to relax during these moments. I missed a couple of threes, but then I trusted everything that she told me.”

So Ron Artest tells the whole world that he owes it all to his therapist. Great. Now, this surely validates the notion that a good therapy session can remedy all the craziness in Hollywood.

Artest’s outside shooting was absolutely therapeutic, though, because the Lakers badly needed offense on Thursday night against a very stingy Boston defense. With Kobe Bryant struggling and the rest of the Lakers were shooting just 28% from the field, Artest rescued the offense with some timely 3-point shots and his tenacity on defense kept Pierce and company from blowing the game open.

Artest said that even though Bryant was having an off night, he was still impacting the game.

“Kobe wanted to win. He didn’t want to lose. He was determined. He was Kobe Bryant, Black Mamba,” Artest explained. “Later in the second half, he started to move the ball and attack and pass. He trusted us and he made us feel so good, and he passed me the ball. He never passed me the ball.”

The “pass” Artest was talking about was the one Bryant fed him late in the fourth quarter. With the game hanging on the balance, Artest drained a 3-pointer from the wing with under two minutes remaining to put the Lakers ahead by six, 79-73. As Artest jogged back to play defense, he blew kisses to the crowd.

“Kobe passed me the ball and I shot a three,” exulted Artest while raising his arms up and down during his postgame press conference.

“And Phil didn’t want me to shoot the three. I heard him because he’s the Zen Master,” Artest said while pointed to his ear. “He can speak to you and he don’t need a microphone. You can hear him in your head, ‘Ron, don’t shoot. Don’t shoot.’

Of course, Artest was being overly dramatic with his story a little bit, but he’s Hollywood now. And you can’t blame the guy for being happy. He’s finally a world champion and this title can’t be taken away from him.

“My history in the playoffs is I’ll have two good games then I’ll have a bad game. Today was one of those where I trusted myself and I didn’t settle for shots. I just want to thank Coach Jackson and Kobe for having me and giving me this opportunity.

“I’m just really, really enjoying this. I just can’t wait to go to the club.”