Game 7. Celtics vs. Lakers. The NBA couldn’t have scripted this any better.

One game will decide the 2010 NBA Finals and it will come down to the two superpowers of the league. The Boston Celtics, winners of 17 world titles, take on the Los Angeles Lakers, owners of 15 world titles. The great Celtics’ defense vs. the Lakers’ triangle offense. Celtic Pride vs. Showtime. The 2008 NBA champion vs. the 2009 NBA champion.

“This is for all the marbles,” said Celtics captain Paul Pierce. “It’s the last game of the season. There’s no turning back and no excuses.”

Game 7 brings out the best and worst in teams. Some can handle the pressure, some can’t.

Celtics coach Doc Rivers certainly understands the enormity of the moment. “It is here and I hope we embrace it,” Rivers said. 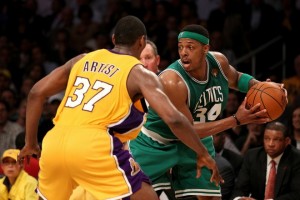 Lakers coach Phil Jackson describes Game 7 as a “really high tension situation” and theorizes that “a lot of times it’s not about the coaching. It’s about who comes out and provides the energy on the floor and play the kind of game that dictates the kind of game they want to dictate.”

Former Celtic Kevin McHale, who played in a Celtic-Laker Game 7 in The Finals in 1984, says the team that imposes their will is the team that wins Game 7, comparing it to a 48-minute fist fight.

However, you paint it or describe it, Game 7 of the NBA Finals is the ultimate game.

Celtics guard Ray Allen probably said it best: “This is definitely a special treat just for the NBA, knowing that we’re going to a Game 7, this is The Finals and it’s the Celtics and the Lakers.”

Kobe Bryant says if he has to tell his teammates how important this game is then his team doesn’t deserve to be champions. He is also approaching this game with the same fervor and intensity he has brought to the court since the start of the playoffs.

“No different to me. Hate to be a buzzkill,” Bryant claimed. “I know what’s at stake, but I’m not trippin. It’s a game we gotta win, it’s as simple as that. I’m not going crazy over it.”

Bryant continued: “My approach is doing what I always do. Because it’s a Game 7 you’d do anything different? If you play hard all the time you just gotta do the same thing you’re accustomed to doing.”

But Kobe is not the only one overflowing with confidence heading into the league’s ultimate game.

“We got some ballers on our team, guys that are ready to play,” Allen boasted. “You can’t shake the character on this team. We’re a group of trash-talking guys, and we compete at everything we do. Everybody believes they can make the shot or stop the guy from scoring. When it comes to Game 7, this is what we’re born to do.”

A few streaks are on the line as the Finals move into the final game of the season:

— Phil Jackson is 47-0 after he wins the first game of a playoff series, which his Lakers did.

— The Celtics have never lost a playoff series (7-0) when Kevin Garnett plays.

— The Celtics are 11-0 in their franchise history when leading 3-2 in a best-of-seven series in The Finals.

Pierce believes the Celtics can’t afford to put forth the same weak effort they displayed in Game 6, a game in which the Lakers dominated from start to finish and won going away, 87-69.

“We have to find a way to come out here and play to a certain level to compete with them,” Pierce said. “You have to understand they’re the defending world champs with a chance at a title. We gotta come out a lot harder. And I promise you, when I stand here Thursday, we will not be talking about energy.”