The Cleveland Cavaliers and the Orlando Magic are without a doubt the two best teams in the Eastern Conference and it will take a monumental upset if both did not make the conference finals.

The Cavaliers ran away with the best record in the NBA at 61-21, but the Magic was arguably the best team after the All-Star break with an 18-3 mark the last two months of the regular season.

Stan Van Gundy will not win coach of the year, but he should get serious consideration for how he has managed the ship. He has been able to incorporate Vince Carter without disrupting the team’s perimeter set-up with Dwight Howard in the middle.

Though Orlando took and converted the most 3-pointers in the league this season, the fate of the franchise starts and ends with Howard, who recently became the first NBA player to lead the league in rebounds, blocked shots and field-goal percentage. He is still perceived to be “too nice” to be a dominant player. However, another trip to the Finals will help Howard erase that label.

Unlike last year, the Cavaliers will have a tougher road to the conference finals. The Cavs have a date with a very underrated Chicago Bulls team in the first round, and then they have a potential matchup with the Boston Celtics in the second round.

It will not be a huge disappointment if the Magic failed to reach the Finals. But if the Cavs get bounced in the conference finals (or sooner), there will be tsunami warning in Cleveland and a funeral service will be held for the Cavaliers in the state of Ohio. No pressure, LeBron!

OneManFastBreak.net predicts the winners of each round in the Eastern Conference playoffs:

(1) Cleveland Cavaliers vs. (8) Chicago Bulls: With Joakim Noah in the lineup, the Bulls are a lot better than their 41-41 record. Noah allows the Bulls to blitz pick-and-roll plays and is a terrific rebounder. Noah’s matchup with Cavs’ high-energy guy Anderson Varejao is worth the price of admission. The Cavaliers will have to re-incorporate Shaquille O’Neal in their offense and defense plans, which will not be easy. The Bulls will try to attack the Cavs with a flurry of pick-and-rolls, and Mike Brown will have to decide if he wants to go with a smaller lineup to counter the Bulls’ quickness. The Cavs should advance, but the Bulls will be a tough out. Cavaliers in 7. 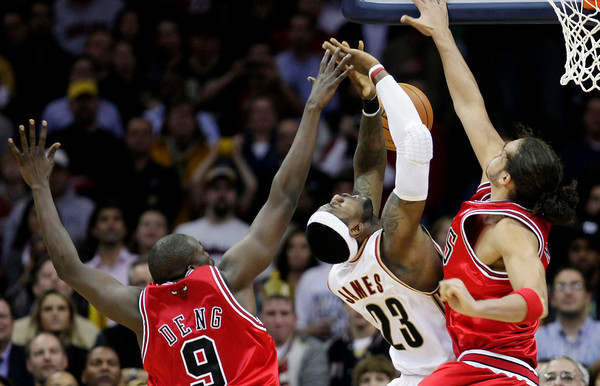 The Cavaliers and LeBron James (middle) will have their hands full against the Bulls' Luol Deng (left) and Joakim Noah. (ASSOCIATED PRESS)

(4) Boston Celtics vs. (5) Miami Heat: The Celtics have the better team in this matchup, but the Heat has the best player in Dwyane Wade. If Wade gets loose and averages 30 points in this series, the Celtics are in for a long series and could get eliminated. Boston is running on fumes while the Heat finished strong and moved up three spots in less than a month. KG will never KG again so Celtic fans need to face the truth. Speaking of The Truth, the Celtics live and die with Paul Pierce. He is Boston’s go-to guy in the clutch and needs to play at an MVP level to cancel out Wade, who is good enough to win two games by himself. Celtics in 6.

(2) Orlando Magic vs. (7) Charlotte Bobcats: Orlando matches up better with Charlotte than Cleveland does, so expect the Magic to punish the Bobcats with a heavy dose of Dwight Howard inside. Larry Brown will try to rotate centers Tyson Chandler and Nazr Mohammed against Howard, and Brown will probably force Howard to pass out of double teams. The Bobcats are such a bad road team that I don’t see them winning more than two games in this series. Orlando should be able to win the first two at home and could split the two games in Charlotte. Magic in 5.

(3) Atlanta Hawks vs. (6) Milwaukee Bucks: The injury to Andrew Bogut changes the entire complexion of this series. The Bucks were rolling until Bogut went down with a scary injury (wrist/elbow) and it will be very difficult for them to take advantage of Atlanta’s small frontline without a legit post player. The Bucks also don’t have an answer for super sub Jamal Crawford, who could become the star of this series. Hawks in 4.

(1) Cleveland Cavaliers vs. (4) Boston Celtics: The last regular-season meeting between these two teams was very chippy so expect a very physical series. The Celtics have the talent to bring down the Cavs, but Father Time hasn’t very kind to the C’s this season. KG is a shell of himself, and Ray Allen and Paul Pierce are on the wrong side of 30. LeBron James, by himself, took the Celtics to 7 games in 2008 with Ben Wallace, Wally Szczerbiak and Sasha Pavlovic as his runningmates. LeBron has a better supporting cast this time. Cavaliers in 5.

(2) Orlando Magic vs. (3) Atlanta Hawks: History shows that the Hawks struggle against teams with an inside game, and the Magic has the best inside presence in the Association in Dwight Howard. Howard, who attended high school in the Atlanta area, should dominate his matchup against Al Horford or Zaza Pachulia, forcing Hawks coach Mike Woodson to double team. This will open up Orlando’s perimeter game, which is right up its wheelhouse. Magic in 5.

(1) Cleveland Cavaliers vs. (2) Orlando Magic: The Cavaliers’ entire offseason was built on beating Orlando in the playoffs. The Cavs got Shaq to guard Dwight Howard and acquired Antawn Jamison to counter Rashard Lewis. The big question mark for Orlando is Vince Carter. Can Carter come through in the clutch and become Vinsanity or will he shrink into Wince Carter? I’m leaning towards Wince Carter. Last year, LeBron James tried to do too much and it cost the Cavs the homecourt and the series. This Cavalier team is the best team LeBron has ever had in Cleveland and it would be a mistake if James doesn’t use them against an Orlando defense geared to stop him. Is LeBron ready to trust his teammates? If he does, then the Cavs advance to the Finals. If not, the Magic will advance to the Finals. I want to pick Orlando, but I’m just not convinced that Vince will do the right thing in the fourth quarter. Cavaliers in 7.