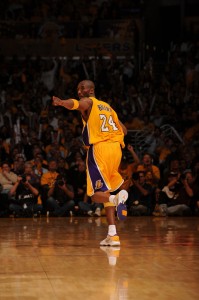 Kobe Bryant collected the 11th 40-point game of his playoff career in Game 1 of the Western Conference finals against the Suns. (NBAE/GETTY IMAGES)

Despite all the things he has achieved in his soon-to-be Hall-of-Fame basketball career, Kobe Bryant still finds little things to motivate him. It’s what makes him the best player in the Association. It’s the reason why he has four NBA championship rings. It’s the kind of closer mentality that separates him from his peers. Actually, take that back. Kobe Bryant is without peer.

Bryant loves to take on challenges. Kevin Durant pushed him in the first round, and Bryant pushed him out of the playoffs. Utah fans made fun of his L.A. Times photo shoot, and Bryant responded by sending the Jazz home after four games. Now, in the Western Conference finals, Bryant has taken on the challenge posed by the Phoenix Suns and forward Grant Hill.

Hill got a five-page scouting report on Bryant courtesy of his Duke buddy Shane Battier. Well, after Bryant lit up Hill and Suns for 40 points to lead the L.A. Lakers to a convincing 128-107 victory in Game 1, Battier may need to send five more pages to help out his fellow Blue Devil.

Since LeBron James accepted his second consecutive NBA regular season MVP award, Bryant has scored 31, 30, 35, 32 and 40 points and the Lakers have won five in a row. Coincidence? Hardly.

Bryant believes he is still the top dog in the league, and not receiving a single first-place MVP vote burns him to the core. (Are you kidding me, media members? Zero first-place votes for the reigning NBA Finals MVP. Unbelievable!). Now, Kobe is going to take it out on the Suns or whichever team comes out of the East.

“Kobe carried a lot of the offense tonight. I don’t know about [taking it personally], but I would say he shouldered the game,” Lakers coach Phil Jackson said of Bryant’s 13-for-23 shooting in Game 1, a game in which the Lakers shot 58% from the field and outscored Phoenix 56-36 in the paint.

“The way he got those points, when he’s in that zone like is tonight there is not a whole lot you can do about it,” Suns coach Alvin Gentry said of Bryant, who scored 21 points in the third quarter and pushed the Lakers to a 14-point lead almost on his own.

“Every time [Kobe] plays he takes it personally,” Gentry added. “That’s his motivation. He understand how important this first game is and I just thought he played at a real, real high level. Since he walked into the league, I’ve never underestimated him. You knew at some stage that he would try to take the game over. That’s what he does. He’s a great player. He is focused on one area and that’s try to win a championship.”

When Kobe was asked if he takes things personally whenever he takes the court, he replied (with a smile): “It’s never personal with me.”

“He’s the best scorer in the league,” Lakers forward Lamar Odom said of Bryant, his teammate of six seasons. “Fadeaways, of course he gets out on the break, playing with his back to the basket, inside, outside, shoots the ball with his left hand when his right hand is broke. Time off was exactly what he needed.”

Given a week off to prepare for the conference finals, Bryant feels healthy and now has a bounce in his step.

“I’ve done a lot of work during the season,” Bryant said. “You see me before games, working on my shooting and just working on different things. Now I feel like I have two legs to play with. I have better balance on my shot, so shots aren’t going short anymore they’re going in. It’s a combination of those two things.”

Though he won’t admit it publicly, Bryant felt completely disrespected with the MVP voting. It was bad enough that his chief rival for the top spot was a runaway winner, but it was compounded by the fact that three media members left him off the All-NBA first team and Durant finished ahead of him.

LeBron may have a case for No. 1, but in no way shape or form that Durant has surpassed Bryant. It’s not even close. Durant led the league in scoring because he was on a team that needed scoring. Bryant could have averaged 30 points during the season if he wanted to, but he’s playing for an NBA title not a scoring title.

And here’s a question for the media who voted for MVP: “How many players had six game-winning shots during the season?”

Not LeBron. Not Durant. Not Dwyane Wade. It’s the guy who is STILL playing in the playoffs and the guy who is about to win his fifth NBA championship ring.