The Phoenix Suns’ zone defense has altered the complexion of the Western Conference finals.

After two convincing victories in Game 1 and Game 2, the Lakers appeared to be headed for sweep until the Suns, out of pure desperation, went exclusively to a zone defense that not only slowed up the Lakers’ offensive attack but it has energized the Suns’ offense. Despite 38 points from Kobe Bryant, the Suns got enough stops on defense and a huge lift from their reserves to score a 115-106 win in Game 4.

“The only thing that we tried to do is that we look at the tape and we try to look at it as if we were the Lakers, and we said, ‘OK, where would you attack us?’ ” said Suns coach Alvin Gentry, whose team has held the Lakers under 50% from the field on consecutive games after L.A. shot 56% in two games in L.A.

The Suns bench also played a big role in Game 4. They not only outscored the Lakers bench, 54-20, but they also brought a lot of energy on the floor and helped Phoenix outrebound the Lakers, 51-36. 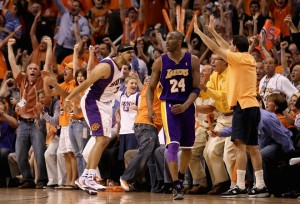 Suns reserve forward Jared Dudley gets the Phoenix fans excited after knocking down a 3-pointer in the fourth quarter. The Suns bench outscored the Lakers bench, 54-20, in Game 4. (NBAE/GETTY IMAGES)

“We saw some areas where we were really vulnerable so we talked to our guys about being well aware of that. One of them was the high screen-and-roll with Kobe,” Gentry explained. “We thought that we would have to get up and at least make him drive it and not just come off and rise up and shoot the ball. We also thought that they would try to pound the ball a lot more, so we would have to be inside and then close out on shooters and I thought we did a good job with that.”

Gentry said the other day the Suns will continue to play their “girly zone” for as long as it keeps the bigger and taller Lakers from dominating inside. “The whole key is, although it’s a zone, we try to match up,” Gentry said. “Initially, everyone has to have a man and then from there we try to pass guys off. Early on they were making jump shots, and I think we’ll have to live with the jump shot.”

Lakers coach Phil Jackson dismissed the notion that the Suns won Game 4 because of the zone defense, noting that the Lakers shot 49% from the field. Instead, he highlighted the fact the Lakers were outshot from the free throw line again.

“We shot 49 percent didn’t we? That’s pretty good. Nothing wrong with that. I won’t say we struggled against the zone. I think we’re struggling at the defensive end,” Jackson explained. “We outscored them from the field in both games, shot better than they did, we did a lot of things very good but still wasn’t enough to win the game. They beat us at the foul line both nights and that’s the difference in the margin of the game. We have to do a better job in that activity.”

Jackson pointed out the discrepancy in the number of foul shots in the two games in Phoenix. In Game 4, the Suns were 22-for-32 from the free throw line while the Lakers shot 7-for-13. In Game 3, the Suns went to the line 42 times and converted 37 of them, while the Lakers got just 20 attempts.

“Every time we came near them they fell down and went to the line,” Jackson joked.

Bryant carried the Lakers offense for much of the second half, including a huge scoring binge in the third quarter. But in the fourth quarter, Bryant was silent and that’s when the Suns bench took over as Channing Frye, Jared Dudley and Leandro Barbosa helped build a nine-point lead on consecutive 3-point shots.

“Our defense could’ve been much better,” Bryant said. “Coming up here, we lost the sense of urgency defensively. I think our concentration was focused on how to attack the zone and it kind of flipped our attention to detail defensively. Our focus was on the other side of the floor, which doesn’t win championships.”

Though Jackson and Bryant made some valid points, the simple fact that they seem very agitated whenever the zone defense questions keep popping up gives reason to believe that the Lakers are frustrated with the way the zone has disrupted their flow and rhythm on offense. The Lakers’ triangle offense is an extension of their defense, and when the Lakers are rolling on offense they seem to play better defensively.

The Lakers are attacking the Suns’ zone defense from the wing, which goes away from the weakness of the zone. There were times when 7-footer Pau Gasol (who was held to 15 points) was out on the wing moving the ball, which takes him out of the low block where he is most effective. The attack must start with one player on the pinch post – either Bryant, Ron Artest or Lamar Odom – initiating the attack from the top of the foul line and down. By putting someone in the middle of the zone, this collapses the defense and opens up the baseline as well as the corner.

Whenever Bryant or Gasol got into the middle of the zone, the Lakers got easy buckets. They did this for much of the third quarter when they made their run but, for whatever reason, got away from it in the fourth quarter and began settling for 3-point shots. The Lakers are 18-for-60 from behind the arc in the last two games.