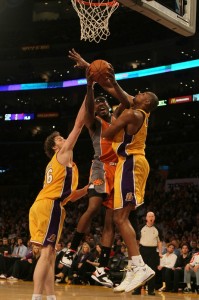 When you pick on the biggest bully on the block, you better be prepared to back up your talk.

Phoenix Suns center Amare Stoudemire first picked on Lakers forward Lamar Odom, dismissing his impact in Game 1 of the Western Conference finals saying that Odom got “lucky” despite scoring 19 points and grabbing 19 rebounds. Then Stoudemire turned his attention to Lakers centers Andrew Bynum and Pau Gasol, saying he used to dominate Gasol when the 7-foot Spaniard played for the Memphis Grizzlies.

“It was total domination,” Stoudemire told The Arizona Republic of his 2005 first-round playoff matchup with Gasol. “But now he has a little brother (Bynum) with him so now he’s a little more confident because he’s got someone to help him in the post.”

Though Odom, Bynum and Gasol didn’t respond publicly to Stoudemire’s statements, they did their talking on the court as they took turns in punishing Stoudemire in the low post, combining for 59 points and 27 rebounds in the Lakers’ 124-112 destruction of the Suns in Game 2.

“Well, what can you say. We’re just having a hard time slowing them down,” said Suns coach Alvin Gentry, whose team is averaging 109 points and shooting almost 50% from the field in the series but still find themselves down 0-2.

“We played well offensively, but every time we make an adjustment to slow them down they go somewhere else. You do a great job on Kobe [Bryant], which I thought we did, they to go to Pau. We go double team Pau and there’s Lamar; we get it out of Lamar’s hands and Jordan Farmar makes shots. They are the reason they’re the world champs.”

After the Suns tied the game at 90 after three quarters, the Lakers went back to their low post attack, which meant a whole lot of Gasol and that’s when the game turned into a rout.

Gasol scored 14 of his game-high 29 points in the fourth quarter and made 11 of 19 shots for the game.

He took advantage of Stoudemire’s inattentiveness on defense. On one play, Stoudemire totally misplayed a pick-and-roll situation and allowed Gasol to slip in for an easy layup. On another play, Stoudemire completely lost Gasol in a crowd and Bryant was able to spot him for another uncontested layup under the basket. And when he’s not embarrassing Stoudemire on pick-and-rolls, Gasol punished him on simple isolations on the low block.

“We had to try to play him straight up, and when we played him straight up Pau had some success,” Gentry said. “The one time we tried to double he turned it over, the next time we doubled he found the open guy and the guy makes a three. You really do have to pick your poison.”

Gentry added: “We just have to take a look at the tape tonight, and maybe we’ll decide we let Kobe score 80 and try to guard the other guys.”

The Lakers are making nearly 58% of their shots from the field and averaging 126 points through the first two games in the series. They enjoyed another big advantage in points in the paint (54-46) and, thanks to another stellar game by Odom (17 points, 11 rebounds) and timely contribution from Farmar (11 points), the Lakers bench outplayed the Suns bench for a second time.

Though his team initially didn’t target Stoudemire on the low block, Lakers coach Phil Jackson said it became a top priority once the Suns’ All-Star center got into foul trouble.

“He’s the initiator of their screen-and-roll offense because of what he can do off his roll activity,” Jackson explained. “We took the ball down in the low post because he had five fouls and we knew it would tough for him to play defense at that time.”

This series can’t end soon enough for Stoudemire, who finished Game 2 with 18 points and six rebounds. The Lakers are just too big, too strong and too talented for the Suns, who will need a lot of luck just to win a game in this series.