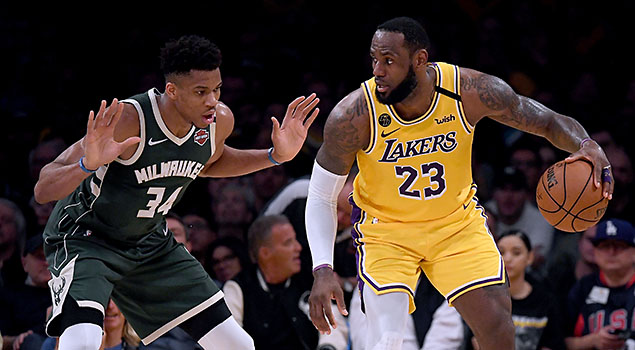 LeBron captured his fourth NBA title and has his sights set on a fifth as his Los Angeles Lakers are locked and loaded for another championship run, arming themselves with some serious firepower through free agency. Gone are Rajon Rondo, Danny Green, JaVale McGee and Dwight. But the Lakers successfully replenished the roster with Dennis Schroder, Wesley Matthews, Marc Gasol and Montrezl Harrell.

As for Giannis and the Milwaukee Bucks, the word of the season is “supermax.” The official name is the Designated Veteran Player Extension. Anyway you want to call it, Giannis is $228 million richer and the entire state of Wisconsin is breathing a sigh of relief after The Greek Freak decided to stay in Milwaukee for at least the next five seasons. “This is my home, this is my city,” Antetokounmpo said via Twitter. “I’m blessed to be able to be a part of the Milwaukee Bucks for the next five years. Let’s make these years count. The show goes on, let’s get it.”

What Giannis did was not the norm. The recent trend has been about player mobility. Team up with another superstar and sign cap-friendly deals to give teams the flexibility to pick up some good pieces. But Giannis is a totally different superstar. He wasn’t exposed to the AAU circuit and his basketball odyssey is unlike any other.

Now that The Greek Freak is committed to Milwaukee, the pressure falls on the shoulders of head coach Mike Budenholzer.

Barring another major coronavirus outbreak that could pause the season, here are the 16 teams that will make the NBA postseason:

1-L.A. Lakers – LeBron James and Anthony Davis proved to the basketball world that they are the best duo. The Lakers look scary good on paper, and this season’s roster is younger and deeper. Coach Frank Vogel could easily have a dynamite 11-man rotation. Dennis Schroder is a huge upgrade at point guard. Marc Gasol adds a veteran presence in the middle, and Montrezl Harrell will generate tons of energy in the building — with or without fans.

2-Utah Jazz – Donovan Mitchell was arguably one of the best players in the bubble and the Jazz rewarded him with a $195 million extension. Mitchell will need to play like a superstar if the Jazz are going to advance deeper in the playoffs. Having forward Bojan Bogdanovic back will make a huge difference. Bogdanovic is coming off wrist surgery but looks to be back in good form. The Jazz missed his outside shooting in the 2020 playoffs.

3-Denver Nuggets – Jamal Murray showed up and showed out in the Orlando bubble. The next step for Murray is to elevate his game into the next tier of superstars. And he’ll have plenty of help in Denver with a stacked roster that includes the second-best center in the league in Nikola Jokic.

4-L.A. Clippers – The Clips underwent a near overhaul with several changes on rosters, including head coach. Doc Rivers left town and is now in Philly. Ty Lue is now the man in charge of managing Kawhi Leonard’s minutes and Paul George’s fragile ego.

5-Portland Trail Blazers – Damian Lillard was the MVP of the bubble. Dame Dollar and his running mate, C.J. McCollum, put on a show in the bubble. But Dame Time expired in the first round. If the Blazers are going to move into the upper echelon they will need more out of Jusuf Nurkic.

6-Dallas Mavericks – The Mavs have something special in Luka Doncic. Luka has the potential to be legendary, but he can’t do it alone. He’s going to need help. Help should come in the form of a healthy Kristaps Porzingis, who is coming off knee surgery.

7-Phoenix Suns – The Suns were knocking on the playoff door in 2020. In 2021, they will kick the door and get in. The acquisition of veteran point guard Chris Paul will only bolster a balanced unit and be a strong mentor to emerging superstar Devin Booker. Booker is a prolific scorer, but his individual success hasn’t translated into wins. Making the playoffs will bolster Booker’s status one of the game’s best players.

8-Houston Rockets – James Harden has made it clear that he no longer wants to be in Houston. Which is unfortunate because the 2021 version of Rockets are far better than the small-ball 2020 Rockets that fell in the second round of the playoffs. The Rockets fired Mike D’Antoni and hired Stephen Silas. The team traded Russell Westbrook to Washington for John Wall, and signed 6-10 center DeMarcus Cousins and 6-10 forward Christian Wood. The Rockets appear to be returning to a more conventional lineup. With or without Harden.

1-Milwaukee Bucks – The Bucks have owned the best record in the East the past two seasons, but regular-season success hasn’t translated into successful postseason runs for Giannis Antetokounmpo and Co. The Bucks made several moves during the offseason to try to upgrade the roster. Jrue Holiday replaces Eric Bledsoe at point guard and Dante DiVicenzo takes over for Wesley Matthews at shooting guard. Bogdan Bogdanovic nearly came over in a free-agent deal, but somehow the Bucks botched it and Bogdanovic ended up in Atlanta. Holiday provides the Bucks an excellent two-way player with a boatload of playoff experience.

2-Miami Heat – Erik Spoelstra surprised the basketball world by taking the fifth-seeded Miami squad all the way to the 2020 NBA Finals. The Heat are a year ahead of schedule, and they will only get better as young studs Bam Adebayo, Duncan Robinson, Kendrick Nunn and Tyler Herro grow into their roles. And as long as Jimmy Butler is healthy, there’s no reason why the Heat wouldn’t be able to duplicate last season’s amazing run.

3-Boston Celtics – The Celtics believe they found their cornerstone franchise player in 22-year-old Jayson Tatum. They believe in him so much that they signed him to a five-year, $195 million extension during the offseason. Hopefully the massive contract won’t be a heavy burden on the young All-Star forward.

4-Brooklyn Nets – No superstar in recent memory was able to completely recover from an Achilles tear and return to superstar form. Dominique Wilkins came the closest, but even the Human Highlight Reel became strictly a jump shooter post-Achilles surgery. Kevin Durant is attempting to be the first to return to superstar form after tearing his Achilles in 2019. If KD is anywhere close to be the KD of old, the Nets will be among the four best teams in the East.

5-Philadelphia 76ers – With the departure of head coach Brett Brown, the 76ers are turning to Doc Rivers to right the ship. Rivers — who won a title in 2008 with Boston and made the Clippers relevant in L.A. — will try to make the pieces fit in Philly, starting with the uber talented but puzzling tandem of Joel Embiid and Ben Simmons.

6-Indiana Pacers – Forward T.J. Warren had an out-of-body experience during the 2020 playoffs. The Pacers are hoping Warren can reclaim the magic and extend it for a whole season. First-time coach Nate Bjorkgren takes over the helm. His first order of business is to figure out if Victor Oladipo is still capable of carrying the offense after a devastating injury. If Oladipo is a no-go, look for Bjorkgren to structure the offense around forward-center Domantas Sabonis.

7-Toronto Raptors – The Raptors lost two key pieces from their championship squad. Marc Gasol signed with the Lakers, while Serge Ibaka joined the Clippers. Nick Nurse will have to rebuild his frontcourt, and it starts with Pascal Siakam. Siakam got exposed a bit during the 2020 playoffs, so he’ll need to elevate his game to make up for the key offseason losses.

8-Orlando Magic – Nikola Vucevic is one of the most underrated and unappreciated players in the NBA. He consistently puts up double figures in scoring and rebounding (19.6 points and 10.9 boards in 2020), and has expanded his range beyond the arc. Vucevic and Aaron Gordon form a powerful frontline in Orlando, and the Markelle Fultz reclamation project has been a success so far. Coach Steve Clifford doesn’t get the credit he deserves, but he keeps finding ways to keep the Magic competitive.