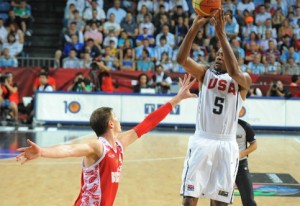 Kevin Durant's game-high 33 points led U.S. to 89-79 victory over Russia in the quarterfinals at the FIBA World Championship. (FIBA)

On Sept. 9, 1972, Russia shocked the United States in the controversial gold-medal game at the Olympics Games in Munich, Germany. It was a bitter loss for the Americans, who still refuse to accept their silver medals because they all believe the game was taken away from them by the officials.

It was the United States’ first loss at the Olympics and signaled the beginning of Russia’s rise to power in basketball. For the last 38 years since that infamous game in Munich, each time the United States and Russia go head to head the game holds a special meaning.

On the anniversary of the Munich game, USA and Russia met in the quarterfinals of the 2010 FIBA World Championship in Turkey.  Even though the Russians are no longer considered a powerhouse on the international stage and the intensity of the rivalry has been watered down since the breakup of the Soviet Union, Russia still presents a threat and the Americans certainly didn’t take the contest lightly during Thursday night’s matchup.

Kevin Durant made sure Team USA didn’t walk off the court disappointed as the Oklahoma City Thunder All-Star led all players with 33 points on 11-for-19 shooting to carry the U.S. to a 89-79 victory. Team USA will face either Lithuania or Argentina in the semifinals at Istanbul, Turkey.

Durant’s Thunder teammate, Russell Westbrook, provided a spark off the bench as 10 of his 12 points came in the third quarter and the U.S. outscored Russia, 26-17, in the quarter. Lamar Odom led the U.S. on the boards with 12 rebounds, and did a solid job in containing Russian 7-footer Timofey Mozgov (13 points).

After a shaky first half that saw the Americans hold a slim 44-39 lead, Westbrook went on a 7-0 individual spurt that included one 3-pointer and two thunderous breakaway dunks off steals. Chauncey Billups scored eight of his 15 points in the third, a quarter in which the U.S. led by as many as 15 and built a 70-56 advantage entering the fourth.

Despite getting caught up in a back-and-forth verbal joust with David Blatt leading up to the game, U.S. head coach Mike Krzyzewski was extremely complimentary of Russia and its head coach.

“I would like to congratulate Russia for playing such a terrific game,” Krzyzewski said. “Coach Blatt has had an amazing career coaching in Russia and the way his team played today shows the high quality of coaching he gives his players. I thought we were ready and played hard. It was a very well earned win against a terrific team with a great coach.”

Krzyzewski added: “They were playing good defense and we were not hitting the shots; the Russians seemed to be in control. The main thing I told my players in that timeout is just relax, there’s a long way to go. When you play against a team that never quits, you know they are going to play every possession and Russia did that.”

Blatt, who played at Princeton for Pete Carril and runs the “Princeton Offense,” took some heat for saying the Russians were the rightful winners of the gold medal at the ’72 Games, which infuriated Krzyzewski and USA Basketball officials.

Coach K fired back and said: “You know, he coaches the Russian team, so he probably has that viewpoint, and his eyes are clearer now because there are no tears in them. So, it’s great. Whatever he thinks, he thinks.”

After the 10-point loss to the U.S. in the quarterfinals, Blatt wished the Americans the best and applauded his coaching counterpart.

“I congratulate Coach K and his great staff and their wonderful team. One of the things that I mostly appreciate about USA Basketball under Coach K is that they recognize how to play the European game and still maintain that advantage that the American game gives them. We tried hard to stop them and there were moments that we were successful, but in all honesty, the game was in the control of the USA team.”

All postgame comments were courtesy of FIBA.com