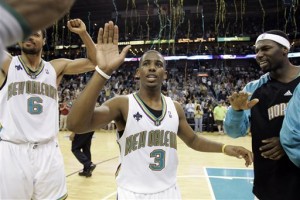 Right Guard, the official deodorant of the NBA, recently announced that they are offering fans and two of their friends a chance to win a trip to play ball with Chris Paul in the “Right Guard Fast Break CP+3 Sweepstakes” beginning at midnight (Central Time) on April 27, hosted exclusively on RightGuard.com.

One grand-prize winner will be awarded round trip airfare, hotel accommodations and food expenses for him/herself and two friends of their choosing to take part in the once-in-a-lifetime opportunity to be on the same court with Paul, the 2008 NBA MVP runner-up of the New Orleans Hornets and Right Guard spokesperson.  Additional prizes include instant win opportunities to receive tickets to the 2009 NBA Playoffs or Finals, and lunch with NBA legends.

The sweepstakes is being held in conjunction with the release of Right Guard’s new Xtreme Fast Break line of antiperspirants and will be promoted via multiple digital platforms, including NBA.com and Right Guard’s Facebook.com fan page. Right Guard Fast Break is the brand’s first new product launch since partnering with the NBA last June to become the league’s official deodorant.