LeBron James told reporters on Friday that he wouldn’t mind seeing less teams in the NBA, a stance that goes against the players’ union. Union president Derek Fisher just so happens to be on the other side of the court today when the Los Angeles Lakers host LeBron and his BFF Dwyane Wade and the Miami Heat at Staples Center in the marquee game of the NBA’s Christmas Day schedule.

Fisher told ESPN News’ Sara Walsh on Friday, “I’m going to be real. Other than just going out and playing against a good team, it’s not necessarily personal. Of course, I want a win against the Heat on Christmas Day. That’s the best gift I can give myself.”

Things just got more interesting in the budding rivalry between the Lakers and the Heat.

Fisher is one of the more politically correct people in the league, so he’s not going to drag this brewing issue to the media. However, don’t be surprised if Fisher sends LeBron a little message in the form of a forearm to the chest. Remember the Luis Scola play? Things could get a little testy. Here’s a look at the matchups: 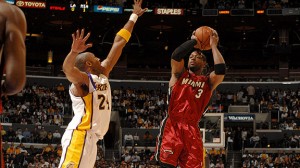 Dwyane Wade could be matched up against Kobe Bryant for much of today's highly anticipated contest. (GETTY IMAGES)

GUARDS: Other than Dwyane Wade, the Heat really don’t have much while the Lakers have a wealth of experience in the backcourt with Kobe Bryant, Derek Fisher, Steve Blake and Shannon Brown. The only way this position matchup evens out is if Carlos Arroyo or Mario Chalmers has a career game – which is probably not going to happen. It will be interesting to see if Wade guards Kobe for the majority of the game. If he does, Wade’s offense will suffer a little bit because he’ll have to waste a lot of energy on defense. If he doesn’t, then his buddy LeBron will likely draw the assignment, but that would mean Wade would have to guard Ron Artest which is no walk in the park either. EDGE: LAKERS

FORWARDS: LeBron James will likely face Ron Artest in a head-to-head showdown worth the price of admission. Artest may be the only player in the league who can dislodge LeBron off the box, and the Lakers don’t have to send an extra defender toward LeBron because Artest can play him straight up. The Chris Bosh-Lamar Odom matchup is an interesting one. Both are lefties and both are streak shooters. Against any other team, Artest and Odom should prevail. But against a Heat squad with two All-Star forwards, the Lakers will have their hands full. EDGE: HEAT

CENTER: The Heat may have The Big Three but the Lakers have The Hollywood Hills in Pau Gasol and Andrew Bynum. Gasol will start the game, but expect Andrew Bynum to have a major impact in the game off the bench. Outside of Zydrunas Ilgauskas, the Heat don’t have another 7-footer who can bother The Hills. Gasol and Bynum are matchup nightmares for 29 teams in the league, and the Lakers are nearly unbeatable when both are healthy. The Heat will be at a severe disadvantage. EDGE: LAKERS

COACHING: Erik Spoelstra is one of young, bright coaches in the league but, let’s get real, he’s facing a living legend in Lakers mastermind Phil Jackson. End of story. EDGE: LAKERS

PREDICTION: LeBron and D-Wade need to be extra special for the Heat to have a chance, while the Lakers just need to play their normal game to take control of the game. Lakers win, 99-93.