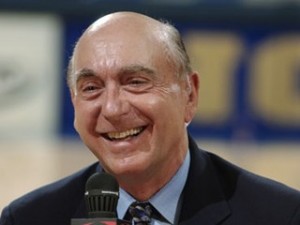 Hall of Famer Dick Vitale has been the face and voice of ESPN's college basketball coverage for 30 years.

Dick Vitale is the most influential figure in college basketball since John Wooden.

Yes, I’m serious.  Dickie V is more than just a TV commentator. He is the face and voice of college basketball for 30 years. What Michael Jackson was to MTV, Dick Vitale is to ESPN. Vitale’s enormous popularity extends beyond one sport. He’s a popular culture icon. Heck, he’s probably one of the most influential figures in sports history, and his recent induction into the Basketball Hall of Fame was well deserved.

The explosion of the NCAA tournament coincided with Vitale’s rise to prominence on cable television. He’s a one-man marketing machine. Vitale made every game he covered for ESPN the most important game of the season. His passion and love for the sport filtered through the airwaves and the fans absolutely went Cameron Crazy when he showed up.

Most college players may not know the names of their local senators and congressmen, but I’d be willing to bet all of them know Dick Vitale.
He’s awesome with a capital A!
I had the great pleasure of meeting Dick Vitale, twice. Once at a game at Pauley Pavilion and the other time was during the grand opening of The ESPN store in Glendale, Calif.

It was 1994 and UCLA had just played Arizona in a nationally televised contest. After the game, I headed to the locker room to do gather some postgame quotes. I was working for the Glendale News-Press at the time and I wore my press badge around my neck. Vitale just happened to be walking by with then UCLA coach Jim Harrick. I said “Hello” to both. Harrick saw my press pass and said, “Glendale News-Press! Say ‘Hi’ to my good friend John Goffredo.” At the time, Goffredo was the boys’ basketball coach at Crescenta Valley High School. Vitale gave me a head nod and said, “How about that Shon Tarver, baby!” Though the meeting was brief, I was honored just to get some kind of acknowledgement.

Get a T.O., baby! Get a T.O….!
Fast forward to 1998 when ESPN opened its first, and I believe only, retail store. I went to the event knowing Vitale was going to be there. After Vitale completed his presentation, I walked up to him and asked if I could take a few minutes of his time. Vitale put his arms around me as if we were lifelong friends and gave me more than a few minutes. He gave me a lifetime of memories.

I sent him the article I wrote for the News-Press and in return he mailed me his book, “Holding Court: Reflections on the game I love.” To this day, I consider that book one my prized possessions, not because it’s a good read (sorry, Dick), but because of the words written inside the book. It read: JOEL, THANKS. AWESOME BABY. DICK VITALE.