The moment the Miami Heat was eliminated from the 2010 NBA playoffs,  the focus of attention shifted to the future of Dwyane Wade. Did he play his last game in a Heat uniform?

Wade was noncommittal as usually, leaving the door open for a possible move elsewhere when he decides to opt out of his Heat contract and become a free agent this summer. He told the Associated Press that whenever he goes out in public he gets asked, “Are you staying or going?”

Is he staying? Or, is he going?

It’s the million dollar question Heat head coach Erik Spoelstra, president Pat Riley and owner Mickey Arison must deal with for the next few months as Wade weighs his options – and he has plenty of viable options.

Wade is among an elite group of NBA superstars, which includes LeBron James, Chris Bosh, Amare Stoudemire, Carlos Boozer, Paul Pierce, Ray Allen, Dirk Nowitzki and Joe Johnson, who can all exercise their rights to become free agents July 1. And for months, Wade has insisted that he won’t truly begin thinking about that process until this season ends.

Well, the Boston Celtics officially put Wade on the clock after the Heat was eliminated in the first round of the 2010 playoffs. 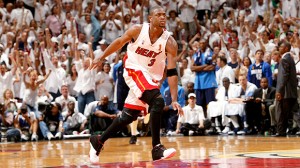 Wade has publicly and privately said that his preference is to stay in Miami, the franchise that drafted him in 2003, as long as the organization commits to an improved roster that will allow him to have another shot at winning a NBA title. Since winning the 2006 NBA Finals, the Heat have won just three playoff games and only three players remain from that championship team.

The pressure falls on Riley to restock the Heat with better players and convince Wade – the 2008-09 NBA scoring champion – that the Heat are committed to winning a title now instead of three, four or five years down the road. Miami has 10 potential free agents this summer and will have plenty of cap space to sign two maximum contracts.

Can you see LeBron and D-Wade in South Beach?

“It’s funny to hear scenarios, for people to tell you that you know and you thought about it,” Wade told AP. “In New York, they kind of made me say, tried to make me say that I have thought about it or I have talked to LeBron. It’s amazing to me that people are inside my head that way. I don’t know.”

Wade’s likely destinations are Miami, Chicago, New York or L.A. (Clippers, not Lakers). Wade is a Chicago native and he’ll have Derrick Rose as his sidekick, making the Bulls very appealing. New York and L.A. don’t have a championship-caliber roster, but playing for a big-market team can extend the D-Wade brand to a larger audience.

Ultimately, Wade will probably end up back in Miami because of the following reasons: 1) South Beach, 2) the Heat can offer Wade more money, 3) South Beach, 4) Riley will lure at least one superstar to play with him (see Chris Bosh or Amare Stoudemire), and 5) South Beach.

Riley is a big Bosh fan and actually had the 6-foot-11 forward rated higher than Wade in the 2003 draft. Bosh is not likely to re-sign with Toronto so he’ll be the most coveted free agent because his decision will affect Wade’s and James’ next move.

So, before Wade makes up his mind, he’ll sit back and take his time before he puts his signature on his next big contract.

“Wait and see. Wade and see, if you want to be cool with it,” he concluded.