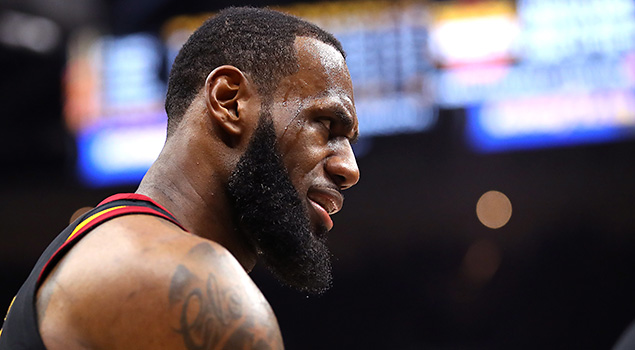 LeBron James agreed to a four-year, $154 million deal with the Lakers. (Getty Images)

There were no ESPN specials or introspective Sports Illustrated essays. It was just one simple tweet from his management group.

LeBron James leaves Cleveland for the second time in his basketball career and heads to Los Angeles to join one of the NBA’s iconic franchises. He will be playing for one of the greatest players in NBA history in Magic Johnson and he’ll be playing under the shadows of 16 championship banners and the retired jerseys of Jerry West, Elgin Baylor, Kareem Abdul-Jabbar, Wilt Chamberlain, James Worthy, Shaquille O’Neal, Kobe Bryant, and Magic.

Unlike his two previous forays into NBA free agency, the 33-year-old global superstar did not drag out his decision and made the announcement less than 24 hours after free agency opened. LeBron said he regretted the way he left Cleveland the first time, and it seemed like he learned his lesson. No more big celebrations. No proclamations of “taking my talents” elsewhere. No videos of “not one, not two, not three, not four, not five, not six” championship predictions. The Decision 3.0 was more mature and, quite frankly, tastefully done.

Shortly after announcing to the world that he is signing with the Lakers, LeBron posted a heartfelt note on Instagram to let Cleveland fans, especially the residents of Northeast Ohio, know how much they meant to him. It read: “Thank you Northeast Ohio for an incredible 4 seasons. This will always be home.”

The message was accompanied by a photo of LeBron riding in a car surrounded by hundreds of fans celebrating the Cavaliers’ 2016 NBA title.

LeBron left a thank you message for Cavs fans on his IG story.

Cleveland sports fans shouldn’t be upset. They had a great run with LeBron. There should be no burning No. 23 jerseys or hate-filled posts on social media. The “kid” from Akron brought a championship to the city and lifted a 52-year curse. The Cavaliers were extremely relevant in his 11 years wearing Cavs colors. He promised a title to The Land and he delivered on that promise when the Cavaliers beat the Golden State Warriors in Game 7 of the 2016 NBA Finals. If anyone has earned the right to choose his own path, it’s LeBron James.

This Cleveland fan gets it.

“You’re talking about a man who ended a 52-year [title] drought, and is sending literally thousands of kids in Akron to college,” said former Cavaliers GM David Griffin, who was partly responding for helping end the 52-year Cleveland curse. Griff, as LeBron affectionately called him, wasn’t completely shocked by LeBron’s decision to sign with the Lakers. Griffin said on NBA TV that it made more sense for LeBron to move to L.A. because of several factors. He has two homes there, one of which is being renovated, and his burgeoning business empire is in Tinseltown. His wife, Savannah, loves it in L.A. as well as his kids. James’ heart may belong to Northeast Ohio, but his mind and his future was in L.A.

“I was one of those people who thought it was inevitable that eventually he was going to leave Cleveland again and the reason was when he came, and the [SI] essay was written by Lee Jenkins, the one thing he talked about was being patient,” Griffin said. “He knew it wasn’t going to happen overnight. And it made it sound like [Cleveland] was where he was going to ride off in the sunset. But he continued to execute one-year deal after one-year deal. What ended up happening is now that ends up signing a longer term deal gives Los Angeles the ability to know what nucleus they are building and it gives him and his family the ability to know this is where we will finish the career. And in all likelihood, this is where he will build his film industry empire as well. They know what the future looks like now.

“When he came to [Cleveland], you always felt like there was another shoe to drop. You just didn’t quite know what it was. So you had to do everything that you possibly could to win that year’s championship. It made the process much more stunted and less organic. But that’s the way [LeBron] wanted it for a reason.”

LeBron wasn’t the only one who handled this free agency news a whole lot better. Cavaliers owner Dan Gilbert released this statement:

“We will always remember the evening of June 19, 2016 as the Cleveland Cavaliers, led by LeBron James, ended the 52-year drought delivering the long elusive championship that many thought they would never see… A championship that united generations of Clevelanders, both living and passed.

Virtually anyone with roots in Northeast Ohio paused and felt the memories of the past and the utter joy that the burden of the so-called ‘curse’ was finally a thing of the past. Cleveland, Ohio was the home of a championship team for the first time since 1964. Words do not express the meaning and the feeling this accomplishment brought to the people of Northeast Ohio.

None of this would have happened if LeBron James did not agree to come back home and lead the Cavaliers to the promised land. The entire Cavaliers franchise thanks LeBron for that precious moment and for all of the excitement he delivered as he led our team to four straight NBA Finals appearances.

LeBron is a family man, first. We wish his kids, his wife Savannah, his mother Gloria, and LeBron himself nothing but the best in the years and decades ahead. LeBron’s connection to Akron, Cleveland and all of Northeast Ohio will most certainly endure as his commitment to the region and his support of many important causes has been impactful to so many kids and families.

LeBron, you came home and delivered the ultimate goal. Nothing but appreciation and gratitude for everything you put into every moment you spent in a Cavaliers uniform. We look forward to the retirement of the famous #23 Cavs jersey one day down the line…”

This was a much different message than the one Gilbert fired off eight years ago when he torched LeBron, calling him a narcissist and a coward. This 2018 letter was much more appreciative and far less combative. Good for Gilbert. Good for LeBron.