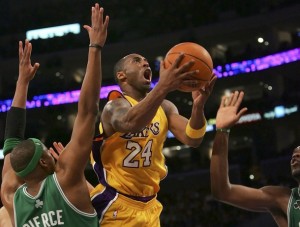 Kobe Bryant played like an MVP against the Boston Celtics on Christmas Day. (GETTY IMAGES)

Chants of “Boston Sucks!” rained all over Staples Center on Christmas Day. The L.A. crowd were feeling good after the Lakers defeated the Celtics, 92-83, to end Boston’s 19-game winning streak and gain an upperhand in the season series.

The Celtics, who had won 19 in a row heading into the highly anticipated showdown, might have pulled a stinker on Christmas but I’m not ready to scream “Boston Sucks!”….not yet. From what I saw sitting 20 rows from courtside at the Downtown Hoop Dojo (that’s for you, Vic The Brick), the Lakers played their best on best ends while the Celtics were not at their best. What does that mean? It means that when both teams are playing at optimum level, the Celtics are the better team.

The Lakers caught the Cs on an off night and Kobe Bryant played near-perfect ball. The Black Mamba consistently made his mid-range J and made two incredible passes to Pau Gasol late in the game to seal the victory. It was 81-81 with about five minutes to play, and then the Lakers blitzed the Celtics, 11-2, down the stretch by playing smart on offense and tough on defense.

Phil Jackson employed a double-team trap on Paul Pierce, forcing him to give up the ball. When Pierce could not get unwind, the Boston offense stalled. The Celtics do not run a complicated scheme on offense. They rely on Pierce and Rajon Rondo to break down the defense. Rondo finds Kevin Garnett or Kendrick Perkins for easy baskets or kicks it out to Pierce and Ray Allen for threes. Pierce loves to operate on the elbows and work his way in with an array of spin moves. To his surprise, when he spun baseline or toward the middle of the lane, there were two Lakers waiting for him.

Some of the credit on defense should go to Sasha Vujacic, who made Ray Allen work extremely hard just to get his shot off. It was a stark contrast from what happened during the the NBA Finals when Allen dropped 3 after 3 after 3 on Vujacic and the Lakers. Vujacic made the adjustment on Allen by being more physical with him as he made his way around the screens.

Vujacic was also a spark on offense, hitting 3-pointers and stretching the Celtics defense with his range. Lamar Odom also played well off the bench, hitting two crucial 3-pointers in the fourth quarter to give the Lakers some separation. In The Finals, the Celtics dared Odom to shoot from the outside and he allowed KG and Co. to get into his head. This time, when Odom got an open look he shot with more confidence.

Andrew Bynum did not post monster numbers, but Boston definitely felt his presence in the paint. Rondo and Pierce had a tough time finishing at the rim because of Bynum’s length, a contrast from last June when Pierce, Allen and Rondo easily got to the rim without much resistance. Bynum also kept Perkins from mauling the Laker bigs inside, and took advantage of Boston’s undersized second unit that includes 6-6 Leon Powe and 6-5 Glenn “Big Baby” Davis. This is where the Celtics miss the services of P.J. Brown and James Posey. Posey stretches the defense with his range while Brown is very skilled at guarding the post. Time will tell if the Boston bench mob, which now relies heavily on Tony Allen and Eddie House for offense, can surivive without Brown and Posey.

The Lakers gained some much-needed confidence from the victory, but Kobe and his crew still has some work to do before they catch the Celtics. At 27-3, Boston is still two games ahead of the Lakers in the loss column in the race for homecourt advantage. The team with homecourt advantage should be favored to win the Larry O’Brien Trophy.

The next game between the two NBA titans will be at TD Banknorth Arena in Boston where the Celtics thoroughly dominated the Lakers in four games last season. Should the Lakers pull off another victory over the Celtics, then maybe I’ll join in on the “Boston Sucks!” chants.