Last June, I was deprived of a Kobe Bryant-LeBron James matchup in the NBA Finals when LeBron and the Cleveland Cavaliers were unceremoniously dumped by the Orlando Magic in the Eastern Conference finals. I know I’ve already asked a ton of gifts this Christmas but I would like one more present. I would like to watch Kobe and LeBron play on Christmas Day.

You’ve got your wish.

The main course on the Christmas Day menu that has everyone salivating is the matchup between the Lakers and the Cavaliers at Staples Center (5 p.m. ET, ABC), featuring arguably the two best players in the Association in reigning NBA Finals MVP Kobe Bryant and reigning regular-season MVP LeBron James. 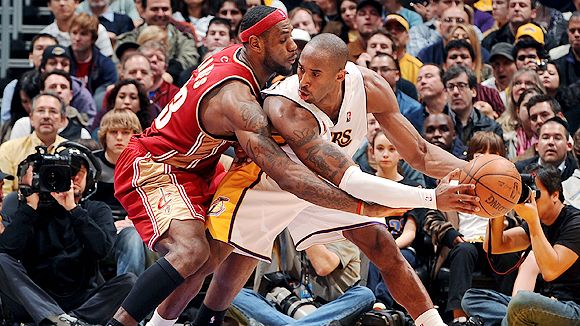 And, oh by the way, Shaquille O’Neal returns to the city he helped produce three NBA championships – as well as two very bad movies: “Kazaam” and “Steel.”

L.A. enters the marquee event with a league-best 23-4 record while the Cavaliers carry a 22-8 mark. The Cavs are on the tail end of a four-game trip while the Lakers have barely left the West Coast for two months.

The Lakers – playing in their 36th Dec. 25 game which is second only to the Knicks, who have been scheduled on Christmas 45 times – are 12-6 at home on Christmas and 20-15 overall. The Cavaliers are relative newcomers to the NBA’s long-standing tradition, making only their third appearance on Christmas in the LeBron James era and ninth overall. Cleveland is 5-0 when they play at home and 0-4 on the road.

As much as the general public and the suits at ABC would like this game to be competitive, the reality of it is the Lakers are far more superior than the Cavaliers, and the only thing Cleveland can hang its hat on is the fact that James could have a huge day and single-handedly influence the action.

However, one ace can’t trump a full house.

The Lakers’ talent and length have been overwhelming the opposition since stealing Gasol from Memphis in February of 2008, winning a remarkable 109 of 121 regular-season games.

Lakers GM Mitch Kupchak is probably not going to get any Christmas cards any time soon from Grizzlies owner Michael Heisley. In fact, Heisley just told me to send over a bunch of coal to put in Kupchak’s stockings.

Needless to say, the Lakers have benefited greatly from the presence of the 7-foot Spaniard, whose high basketball IQ and low-maintenance personality has been the perfect complement to the hard-driven, super-confident Bryant.

In two meetings against the Cavaliers last season, Gasol averaged 20 points and 12.5 rebounds. He made 11 of 13 shots from the field in the Jan. 19 game at Staples, and three weeks later Gasol and Odom combined for 46 points and 29 rebounds in a 101-91 Laker win on Feb. 8.

The Lakers’ frontline thoroughly dominated the Cavs, 104-52, in points in the paint in the two games. Add Artest in the mix and the Lakers will have an even bigger advantage.

Cleveland tried to fix its frontcourt issues this offseason by trading for O’Neal. The problem is, O’Neal’s best days are behind him and his level of play is more in line with DJ Mbenga than Bynum.

With Shaq no longer Shaq, the Cavs have been leaning Mo Williams to help LeBron on offense. Unfortunately, Williams is more like a starting pitcher than a starting point guard, finding his groove on every fifth day.

So, unless Williams and O’Neal have an out-of-body experience and play out of their minds, expect two things to happen on Christmas Day: the Lakers should dominate the Cavs…again…and Nike will blitz the audience with an endless stream of Kobe and LeBron puppet commercials.