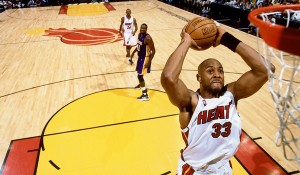 When you look up the word “warrior” in the online dictionary, it reads: one who is engaged aggressively or energetically in an activity, cause, or conflict.

When you look up the picture of a warrior, you see Alonzo Mourning.

Mourning, 38, announced his retirement from the NBA after 15 years of engaging in aggressive and energetic activity on the basketball court. The knee injury he suffered back in December of 2007 was just too much to overcome for a man who has overcome so much during his career. He left the court as the all-time leader in points and rebounds for the Miami Heat and his 2,356 blocked shots ranks him 10th in league history. He was twice named defensive player of the year and was named to the All-Star team seven times.

But Mourning’s contribution to the game goes beyond hardware and statistics. He was, and always will be, the heart and soul of the Miami Heat. He anchored Pat Riley’s defense that was built around intimidation. He was the inspirational leader of the Heat teams of the late 1990s that included Tim Hardaway, Dan Majerle, Jamal Mashburn, P.J. Brown and Voshon Lenard.

Mourning is remembered more for being a hated brute than a beloved superstar. He wore his Georgetown scowl as soon as he stepped off the bus. Because he was a bit undersized as a center (listed at a generous 6-foot-10), Zo had to make up for his lack of length with grit, determination and intimidation. He played every minute or every game as if it was his last. He often willed his teams to victories. He often did not back down from a physical challenge. And when he got knocked down, he often got right back up.

He got right back up after being forced to retire in 2002 because of a bad kidney. During an emotional retirement press conference, Riley could not hold back the tears when he told reporters that Mourning, a pillar of strength and health since becoming the face of the Heat franchise in 1996, was retiring. After taking a year off, Zo returned to the NBA in 2003 and joined the New Jersey Nets. Riley got teary-eyed again in 2005 when Mourning returned to the Heat.

Because he wore his aggression and his passion on his biceps, Mourning was a magnet for confrontations. His battles with fellow Hoya, Patrick Ewing, during the 1990s were legendary. Larry Johnson could not stand him when they were teammates in Charlotte and the two got into a serious throw-down at Madison Square Garden with Jeff Van Gundy playing referee and holding on for dear life. Shaquille O’Neal relished his matchups with Zo so that he can dunk on him. O’Neal and Mourning would eventually make peace and lead the Heat to a championship in 2006.

O’Neal paid Mourning a high compliment when he chose not to wear No. 33 when he first arrived in Miami. Shaq believed that “33” should be reserved for the man who shouldered the Miami Heat franchise through bad times and good times for 11 seasons.

It will be greatly debated whether Mouring deserves to be in the Naismith Basketball Hall of Fame. If the criteria is solely based on numbers, Zo is a longshot. But if more weight was placed on having a warrior’s mentality on the court and performing community service off it (he is heavily involved in the McDonald’s All-American Game and Zo’s Summer Goove is one of the more popular exhibition games during the offseason), Alonzo Mourning’s name belongs in the hallways of Springfield.

5) Zo’s Summer Groove – Now in it’s 12th year, this annual charity event raises funds for the Alonzo Mourning Charities, which has raised more than $6.5 million for various programs that aid in the development of children and their families in struggling communities.

4) Winning gold in 2000 Olympics – As the only true center on the roster, Mourning more than held his own against the rest of the world and was the defensive foundation of the U.S. team that took home the gold medal at the Sydney Games.

3) Shooting down the Celtics in the playoffs – During his rookie season with the Charlotte Hornets, he made a game-winning jumper with no time left on the clock that eliminated the Boston Celtics from the 1993 Eastern Conference playoffs.

2) Coming back from retirement and overcoming the odds – After being forced to retire in 2002 because of a failing kidney, Mourning got himself back in shape and returned to the NBA with the New Jersey Nets in 2003. After two uneventful seasons in New Jersey, he was reunited with Riley and Miami in 2005.

1) Winning an NBA championship with the Heat in 2006 – After 13 years of coming up short, Mourning finally became a champion. One of the highlights of the 2006 NBA Finals was when a 36-year-old Mourning pulled back time and gave a performance for the ages, blocking five shots and throwing down one vicious dunk to spark the Heat to its first NBA title.