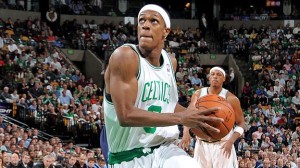 Boston's Rajon Rondo is averaging close to a triple-double in three games against Chicago. (GETTY IMAGES)

Here are some observations and analysis from the first week of the NBA playoffs.

Boston’s Rajon Rondo is enjoying a big time coming out party. The Celtics’ point guard has been an absolute superstar in the first round. Chicago Bulls rookie Derrick Rose got all the ink after a tremendous Game 1 at Boston’s TD Banknorth Arena but, if you take a closer look at the head-to-head matchup, Rondo has thoroughly outplayed his counterpart. The Celtics’ point guard is averaging close to a triple-double in the series and his Game 2 performance was sick – 19 points, 12 rebounds and 16 assists and five steals. Then, in Game 3 at the United Center on Derrick Rose Night, Rondo posted 20-11-6-5. He has been so hot in these playoffs that his feet started burning and had to be carried off the court by his teammates. It has often been said that reputations are made in the playoffs, and so far Rondo is earning the respect of the entire basketball community. With all due respect to LeBron James, Rondo has been the most valuable player in the Eastern Conference playoffs.

If Rondo is the MVP of the East, then so far Denver point guard Chauncey Billups has been the most impressive player in the West. Mr. Big Shot is completely undressing Chris Paul in their first-round matchup. In two games against the New Orleans Hornets, Billups has 67 points and has swished 12 of 15 shots from behind the 3-point line. More importantly, Billups has 0 turnovers. Let me say that again … Billups has 0 turnovers. For a point guard to not turn the ball over in two games is a mind-blowing stat. Especially in the playoffs. Billups is like a veteran NFL quarterback who has stabilized the offense, infused some much-needed leadership on and off the court, and managed to keep everyone happy – including Carmelo Anthony. He has turned the Nuggets from a borderline playoff team to a legit conference title contender. If Billups keeps this up, he could challenge John Elway as the mayor of Denver.

The San Antonio Spurs are looking really, really old. It’s no secret that the Spurs have logged a ton of playoff mileage during the Tim Duncan Era but – with the exception of Tony Parker – the Spurs are looking like they are carrying bricks on their shoes and their once-dominant defense now has some serious issues. They have turned J.J. Barea into an all-star. Who? J.J. Barea! This is the same guy Jason Terry once mistakenly called J.J. Barrera. On offense, the Spurs really miss Manu Ginobili. Ginobili always excelled in the postseason, and his absence may be too much to overcome. Dallas has a 2-1 series edge on San Antonio, and if the Spurs are not careful they could be watching the rest of the playoffs from home.