Washington Wizards point guard Gilbert Arenas is reportedly dropping his “Hibachi” and “Agent Zero” monikers and vows to focus on just playing basketball, something he has not been able to do the past two seasons.

In the past two seasons, Arenas has appeared in just 15 games, two in 2008-09 and 13 in 2007-08, all because of chronic knee pain that stems from the day he tore the lateral meniscus of his left knee. His once shining star has been diffused by a devastating knee injury that has not only stymied his growth as a first-team All-NBA performance but it has altered the present and future of the Wizards.

Without Arenas, the Wizards became a lottery team and popular coach Eddie Jordan was let go. Flip Saunders was hired to rebuild the Wizards, and so far his presence has been a welcomed sight.

“[Flip] just brings a certain energy and it’s been fun for us because he keeps it moving,” said Mike Miller, who was acquired by the Wizards, along with guard Randy Foye, in an offseason trade with Minnesota. “It’s been a lot of fun picking up his offense, and we’re looking forward to winning some games.”

Saunders loves to teach offense and is one of the best play-callers in the NBA. As much as Arenas loved to play for Jordan, he will enjoy running Saunders’ free-flowing offense. 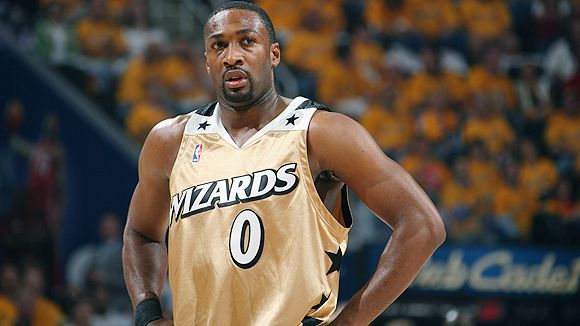 Gilbert Arenas has played in only 15 games the past two seasons. (ASSOCIATED PRESS)

To prepare for the this season, Arenas hired Tim Grover, the former personal trainer for Michael Jordan.

“He saved my career,” Arenas said of Grover, who was responsible for rebuilding Dwyane Wade’s body last season.

Wade was in the same predicament two seasons ago and, when he graduated from Grover’s training academy, he returned to being an All-NBA performer and won his first scoring title.

“Gil wanted to come in and do so much we actually had to teach him how to work out smarter instead of working out harder. The results have been fantastic. We’re just showing him the way; he’s doing all the work.”

Grover’s training methods appears to be working as Arenas came into camp 20 pounds lighter and looks to be in incredible shape.

“Before, I used to work out everyday so I never got out of shape. Now, instead of just working out I focused on something; focus on my knee and make sure I don’t have any relapses. I was one of those kids who never really lifted [weights]. When I got hurt, I never really built my knee back,” said Arenas, who appears to be ahead of schedule and should return to his rightful place as one of the top guards in the league.

“He looks like Agent Zero again,” Miller said of Arenas. “In the playoffs, everyone knows that you gotta have that one guy who can win it for you single-handedly, and we have that guy in [Gilbert]. He looks really healthy, really good, and he’s taking a good pace too. When you miss a year and half, it takes some time mentally and physically.”