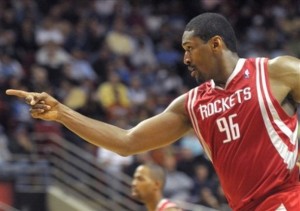 Ron Artest is not going down without a fight in the Western Conference semifinals. (ASSOCIATED PRESS)

Despite having watched his team get destroyed by 40 points in Game 5, Ron Artest remained confident. In fact, he was so confident that he believed his Houston Rockets would be back in Los Angeles on Sunday for Game 7, which meant he guaranteed a Rockets victory in Game 6.

“We come back in Game 7, we’ll know what to expect and how to play, and the energy they’re bringing and everything like that,” Artest said at the postgame news conference just minutes after the Lakers delivered a 118-78 thumping on the Rockets to regain control of the seven-game series.

Though the Lakers are ahead 3-2 in the series, Artest is not ready to see his face on TNT’s “Inside the NBA” show with a fishing rod in his hand.

“For us, it don’t matter which Laker team shows up. It’s all about which Houston Rockets team that shows up. I like the position that we’re in right now. I think we’re gonna be fine.”

Artest continued: “The good thing about is, Tim Ledger, or Leg … ‘How do you say his name?’ Legler! Tim Legler! When we lost Mac (Tracy McGrady), he said we’re not going to the playoffs,” Artest said. “Then, Charles Barkley said we’re not getting out of the first round, these guys are horrible. The good thing about it is, whatever those guys say is wrong. And they said the Lakers are going to win. That’s something to be encouraged about.”

“Chuck has to understand he can’t foul early. When he’s out of the game, Gasol has a better chance in the low block. When Chuck fouled early, that hurt us,” said Artest, who cited the Lakers’ big height advantage inside with 7-foot Andrew Bynum, 7-foot Pau Gasol and 6-10 Lamar Odom.

“We’re 6-8, 6-9 … tops. We have no room for error. When Chuck goes out, they started getting tips and we miss rebounds. That’s what happened in Game 4; we didn’t make any errors. I don’t think it was so much was the Lakers did.”

As for what the Rockets need to do on offense for Game 6, Artest said, “We had a good couple of minutes, then we started to turn the ball over. But we’re gonna adjust. That’s been the thing with the Houston Rockets. Even when Yao went out, we adjust. We were on the road the first time without Yao. So that was an adjustment for us.”

The Rockets may be down in this fight, but Artest plans on going two more rounds with the Lakers.