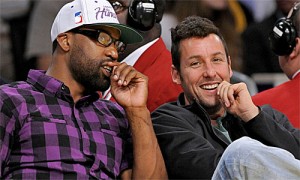 Baron Davis loves nicknames. He’s been known as: B-Diddy….BD….The Beard….Baron of the Hardwood….and, a personal fave, Boom Dizzle. His given name was simply not sufficient enough to pacify the former UCLA and Santa Monica Crossroads stud.

Or, maybe he wears too many hats off the court. When he’s not dealing on the basketball court, Davis is making deals as a businessman, producer, manager and part-time actor. B-Diddy has been associated with pop culture icons such as The Game, Jessica Alba, Adam Sandler and Kate Hudson.

Davis’ game and his Hollywood persona belongs in Los Angeles. The match made in heaven finally materialized when Davis signed with the Clippers last summer. Davis adds starpower to a star-craving team that is looking to possibly steal some of the spotlight away from Kobe Bryant and the Lakers. OK, maybe the Clippers are not ready to steal the spotlight from the Lakers after a 38-point thumping at Staples Center on opening night.

“One of the big reasons I wanted to come back home was so I could impact the communities of my hometown in a positive way, and I’m excited to do that,” Davis wrote on his blog site. “I was trying to wear number 85, in honor of the street I grew up on and where my basketball career was truly started by my grandfather who built my first hoop in our backyard. However, I chose number 1, I’ve worn it before and feel comfortable in it. ”

For much of his professional basketball career, Davis has been tagged with the “potential” nameplate, something that most athletes dread because the word essentially translates to “disappointment.” Whenever someone is tabbed with great potential, it usually means there are several flaws in that player’s game.

In Davis’ case, at least earlier in his NBA career, he was a bit reckless on the court and his game was more suited for the And 1 Mix Tape Tour. He was also built like a fullback, causing him to miss several games for various ailments. The most serious one was the back injury that plagued him during his days with the Charlotte/New Orleans Hornets and his first few years with the Golden State Warriors.

But once Davis was able to overcome his back problem, he not only shed the “streetball” off his game but he was able to shed a few pounds as well.  He played 82 games in 2007-08, the first time he’s played a full regular season since 2001-02. The defining moment of his career came in the 2007 NBA playoffs when his underdog Warriors eliminated the heavily-favored Dallas Mavericks in the first round.

Though his time with the Warriors was priceless, Davis needed to be home. He opted out of his Golden State contract and signed a free-agent deal with the Los Angeles Clippers this past summer. With a fat new contract and a more slimmer body (he’s lost 19 pounds during the offseason), Davis looks like he’s ready to re-establish himself as one of the top point guards in the Association and make the Clippers a contender in the ultra-competitive Western Conference.