The Eastern Conference playoffs have become a sparring session for the Orlando Magic, as Dwight Howard and Co. have clearly separated themselves from the rest of the conference and should be considered the favorites to reach the NBA Finals.

The Beast of the East barely broke a sweat in pounding the Atlanta Hawks by 43 points in Game 1 of their series. Some thought the Magic were going into the series a bit rusty because of the eight-day layoff after sweeping Charlotte. Instead, it was the Hawks who looked weary and tired after their seven-game battle in the first round against Milwaukee.

Orlando is 5-0 in the 2010 playoffs and Atlanta will be fortunate to win one game in this series.

“Coach [Stan Van Gundy] did a good job in making sure we were ready tonight,” said Dwight Howard, who scored 21 points in just 28 minutes, but it wasn’t because of the foul trouble that plagued him in the first round against Charlotte. The way the Magic shot the ball and played team defense on Tuesday night, they could have won with Tree Rollins at center. 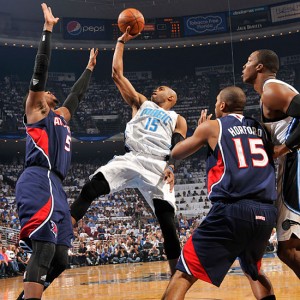 Vince Carter scored 20 points in Game 1 against the Hawks, a game in which Orlando dominated from the start. (NBAE/GETTY IMAGES)

“It wasn’t in our plans. It’s something we have to deal with and move forward,” said Hawks center Al Horford, who gives up three or four inches to Howard and has not played well against Orlando in the past.

“I think we had a solid game plan and it just kinda got away from us. It was just a snowball effect. We know we’re better than this. It’s gut-check time for our team.”

Horford and the rest of the Hawks big men will have the huge task of containing Howard, who averages 21 points and 17 rebounds against his hometown team. Howard, who attended a prep school in the Atlanta area, made eight of 10 shots and pulled down 12 rebounds in Game 1.

“We understand that it’s only one game. In order for us to win this series, we have to dominate every night and remain humble. We have to have the same effort every night,” said Howard, who says this series will be far different than the first-round series against the Bobcats, in which he barely stayed on the court because of foul trouble.

“I just understood that the first series was very physical,” said the two-time NBA defensive player of the year. “I just looked back to last year, the first series was tough for me mentally. As the playoffs went on, I got a little bit better and matured. I didn’t allow anything to just throw me off my game tonight, and this is what I need to do for the rest of this series.”