Once the deck cleared from all the wheeling and dealing before Thursday afternoon’s NBA trade deadline, certain teams cashed in while others held on to their cards hoping to hit the jackpot this summer.

NBA.com writer Shaun Powell said it best – it’s all about the cheddar. It’s really all about the money, teams that are trying to save money and teams who are just laughing at the luxury tax and building for right now trying to win a championship.

So, pending all these players pass their physicals, here are the winners, losers and teams that broke even during the NBA’s liquidation sale, better known as the trading deadline.

The Cavaliers got their highly coveted All-Star forward to serve as LeBron James’ wingman. No, it’s not Amare Stoudemire. But in the eyes of many observers, the acquisition of Antawn Jamison on Wednesday as part of a three-team deal that involved the Cavaliers, Wizards and Clippers was probably the better move in the long run.

“It’s clearly a win-win for Cleveland. They get an All-Star piece and they didn’t have to give up [J.J.] Hickson,” said Covers Handicapping Expert Ted Sevransky.

Jeff Sherman, oddsmaker at the Las Vegas Hilton, noted that the Cavaliers were already a hot pick to win the NBA title and the Jamison deal definitely increased their chances of advancing past the Eastern Conference.

“It would have more of an effect in them getting out of the East,” said Sherman, who added that the Cavaliers were 3-2 favorites to win the title prior to the Jamison deal. The Las Vegas Hilton had the Cavs at 3-1 to start the season.

“There are only a handful of teams that can make The Finals,” Sherman said. “Boston is aging andrapidly regressing. KG is not 100% and [Paul] Pierce is breaking down. The gap is widening in the East with Cleveland as the favorite.” 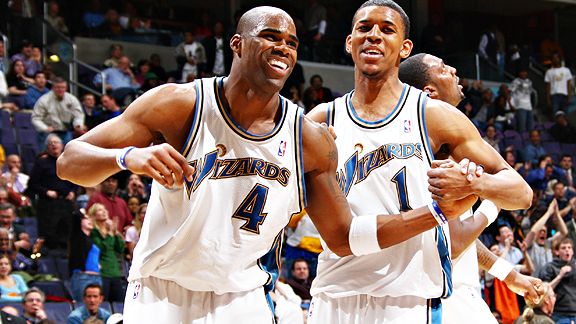 Kevin McHale, who now works for NBA TV, also likes the Jamison trade, particularly if the Cavaliers face the Magic at some point in the playoffs.

“I think this trade was destined to happen ever since they lost to Orlando in the playoffs where they couldn’t match up with Rashard Lewis,” McHale said on Thursday. “They needed somebody to attack Rashard Lewis, and Antawn is going to make Lewis defend him.”

Two teams that also helped themselves, according Sevransky, are the Charlotte Bobcats and the Houston Rockets.

According to league sources, the Bobcats acquired Thomas from the Bulls for Flip Murray, Acie Law and a draft pick. Thomas, who will be a restricted free agent after this season, is an athletic forward who fits perfectly in head coach Larry Brown’s scheme.

“Tyrus Thomas is a huge upgrade for Charlotte. Larry Brown will make him into a star,” said Sevransky, who also likes what Houston did to its roster by getting rid of Tracy McGrady’s fat contract and bringing in Kevin Martin from Sacramento. 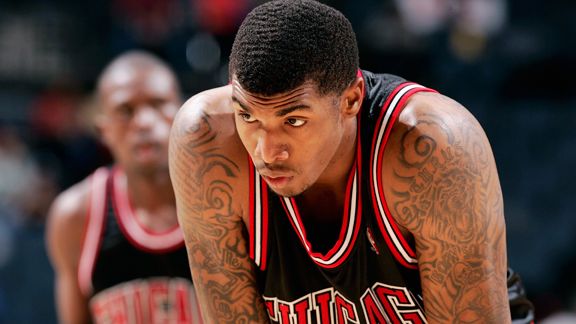 “It’s a huge trade for Houston. They needed a perimeter scorer and Kevin Martin is an All-Star. Love the move,” Sevransky said of the reported three-team deal that moved Martin, Jordan Hill and Jared Jeffries to Houston while the Kings got Carl Landry, Joey Dorsey and Larry Hughes, and the Knicks received McGrady and his expiring $23 million contract along with Sergio Rodriguez.

Also, keep in mind that the Rockets obtained the Knicks’ first-round pick in 2010, which could potentially be a lottery pick. Rockets GM Daryl Morey really earned his paycheck this week and should be nominated for executive of the year.

For the Knicks, the silver lining is that they are no longer tied to Jeffries’ contract, freeing them up to sign not one but two maximum contracts this summer.

Even though they cleared a boatload of cap space for the big free-agent class of 2010, the Knicks didn’t exactly improve themselves this season and are hoping – or more like praying – that they can lure LeBron or Dwyane Wade, or both, this summer.

McGrady is a rent-a-player for the next three months with a 50-50 chance that he’ll re-sign next season. But his current condition – two bad knees, a bum shoulder and an aching back – is not going to change the Knicks’ pitiful position.

“The Knicks were bad before and now they are worse. I want no part of the Knicks,” says Sevransky. “[McGrady] will put up points but he’s not the impact player he once was. The reality is, his best days are long, long gone.”

New York has four players under contract for next season – Danillo Gallinari, Wilson Chandler, Eddy Curry and Toney Douglas – and if GM Donnie Walsh can’t convince any of the megastars to come to the Big Apple, the Knicks could potentially field a D-League team next season.

All week long the Heat and Cavs were in hot pursuit of Stoudemire, but the Cavs got impatient and struck a deal with the Wizards while the Heat was stuck waiting on Suns GM Steve Kerr, who got cold feet.

Miami tried to salvage the day by going after Utah’s Carlos Boozer, but the deal fell apart. The Heat can still sign Stoudemire this summer when he could opt out of his contract, but Pat Riley and Heat owner Mickey Arison must now sweat out the next few months because Wade is not happy he didn’t get his super sidekick, and when a superstar is not happy that can’t be good for business.

The Bulls got rid of Thomas and John Salmons in exchange for some expiring contracts, a clear indication that the Bulls will sacrifice a playoff run this season and join in on the LeBron, D-Wade and Chris Bosh sweepstakes.

Chicago (27-26 SU) is currently in sixth place in the East, two games behind Toronto (29-24 SU). But giving up on a young talent like Thomas and putting all their eggs in this summer’s free agent basket appears to be a desperate move for a team that made a fantastic playoff run just a year ago.

The Celtics made one reported move before the deadline, acquiring three-time slam dunk champion Nate Robinson from the Knicks for Eddie House, J.R. Giddens and Bill Walker. Though Robinson (13.2 PPG) has better offensive numbers than House (7.2), Robinson may not be the right fit for the C’s.

While the Cavaliers continue to stock pile talent for the stretch run in the regular season and the playoffs, the Wizards have basically put their entire roster in one big garage sale.

You can’t fault the Mavericks for trying to get better. Was it enough to punch their ticket to the Western Conference finals? The jury is still out.

Sherman is not infatuated with this deal, but Sevransky believes Dallas scored major points with the move, making this seven-player deal a push.

“That was a marginal deal,” Sherman said. “I don’t see a great difference between Butler and Howard; maybe a slight advantage for Dallas.”

“We just don’t see anyone besides L.A. and Denver in the West,” Sherman said.

Howard and Butler are very similar in terms of scoring, but Butler brings more of a defensive attitude to a Mavs team that desperately needs to get tougher. Butler was reportedly unhappy with the way he was being used by Flip Saunders and having Jason Kidd as a set-up man has him very excited.

“The Mavericks helped themselves tremendously,” Sevransky said. “They bring in a scorer like Butler and a defender like Haywood, and I would make them the No. 2 team in the West behind the Lakers and ahead of Denver.”

Another marginal deal is the transaction between the Blazers and Clippers that sent Clippers forward/center Marcus Camby to the Blazers. Sherman said the line jumped by just 1/2 a point from 6 1/2 to 7 from Tuesday’s Clippers-Blazers game.

“Brandon Roy is still the driving force on that team,” said Sherman, who called the deal a push. “I don’t think it did much. All they’re going to ask [Camby] to do is defense and rebound. He’s not going to add more scoring.”

The biggest name that kept surfacing leading up to the trade deadline was Stoudemire. But at the end of the day, Stoudemire is STILL with the Suns.

“Without getting into specifics, if we’re going to move a guy who is an All-Star player, a real productive player, we have to do really well,” Kerr said on NBA TV. “The only reason why we were talking to teams was because Amare could opt out at the end of the year and obviously we are at risk of losing him and not getting anything in return.

“So, the whole idea here is let’s find out what’s out there, we’ll evaluate it. If it’s good enough and it helps us get better in the future, then we’ll do it. If not, we move forward. And what any team offered was just not good enough.”