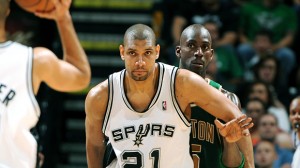 San Antonio's Tim Duncan is ahead of Boston's Kevin Garnett when it comes to championship rings. Duncan owns four while KG has one. (GETTY IMAGES)

Tim Duncan is the greatest power forward in the history of the NBA! Shhhhh. Don’t say it too loud because someone may hear it and tell Timmy. In case you don’t know, the San Antonio Spurs’ super stud prefers the low-key approach.

The big man from the Virgin Islands is not one who boasts about his accomplishments. It’s not his style. This season, Duncan surpassed 10,000 rebounds for his career, making him the 33rd player in NBA history to do so. When someone brought it up to the Big Fundamental, he said “It just means I’m getting older.” Last month, he became only the 14th player in league history to surpass 2,000 blocks.

Duncan is one of only four players in league history to have at least 18,000 points, 10,000 rebounds, 2,500 assists and 2,000 blocks. The other three are Shaquille O’Neal, Hakeem Olajuwon and Kareem Abdul-Jabbar.

While most great players embrace the spotlight and thrive on being loud and proud, Duncan chooses to be just one of the guys. His actions speak volumes, though. He owns four championship rings, two league MVP trophies and three NBA Finals MVPs. His name has been on the all-NBA teams and all-defensive teams 11 times. San Antonio has never missed the playoffs in the Tim Duncan Era.

1) TIM DUNCAN: The total package. Can change the game on both ends.

2) KEVIN GARNETT: His stock rose five spots after helping the Cs raise championship banner No. 17 last June. Defense is KG’s big ticket. Has the size, speed and wingspan to guard all five positions. His entry into the 1995 NBA draft straight from high school and the $120-million contract he signed when he was in Minnesota forever changed the game.

6) JAMES WORTHY: Whether he played small forward or power forward, “Big Game” James was Magic Johnson’s go-to guy when the Showtime Lakers needed a hoop. Nothing small about Worthy’s game. He blended power and speed, and is one of best finishers on the break.

7) BOB PETIT Had to pay homage to the original “best PF.” The great Bill Russell said that “Bob made ‘second effort’ a part of the sports vocabulary.” Won an NBA title in 1958 and was league MVP twice.

8) DENNIS RODMAN: Ignore all the antics and the off-the-court issues and you have a unique player who might one of the five best defensive players of all time. Phil Jackson calls him one of the smartest players he’s ever coached. While a number of players has struggled to learn Jackson’s triangle offense, Rodman learned it in a week.

9) BOB McADOO: One of the greatest scoring forwards in league history. A three-time NBA scoring champion and MVP of the 1975 regular season. Helped the Los Angeles Lakers win the championship in 1982 and 1985. Elected to the Basketball Hall of Fame in 2000.

10) ELVIN HAYES: The Big E was and still is the face of Houston basketball – in college and at the pro level. His signature baseline turn-around jumper has been imitated but never duplicated.