Shaquille O’Neal took some heat on Twitter Tuesday night during his jersey retirement ceremony for not mentioning his Laker teammates, especially Kobe Bryant. Can we just drop this whole Shaq-Kobe hate thing? That was so 2008!

Los Angeles Times columnist Bill Plaschke reopened old wounds when he tweeted this Tuesday night: “Stunned that everyone wants Shaq to thank Kobe, yet Kobe couldn’t even come out of locker room first to thank him? For those of us who had to live through the Shaq-Kobe feud, it’s sad that even now, they can’t get together on a court to honor each other.”

C’mon, Plaschke! You’re one of my favorite writers, but let’s not go there.

Time heals all wounds and it appears that Shaq and Kobe have indeed buried the hatchet. When Shaq dropped by Staples Center to catch a Lakers-Suns game in February, he and Kobe embraced, had a nice conversation, and even shared a laugh. Kobe playfully calls Shaq “Four” to remind the big fella that he’s one behind the Black Mamba in the number of championships won. Kobe recently admitted that playing with Shaq was never going to last long because, as he told Yahoo! Sports writer Marc J. Spears, “you can’t expect Michael [Jordan] to play with Wilt [Chamberlain] for his entire career.” Kobe also said he sacrificed a lot numbers-wise to play with Shaq, and he simply had “too much talent” to just play the second lead in L.A.

The two have come a long way since they’re playing days when they literally tried to kill each other on and off the court. Even when Shaq left L.A. he still found ways to irritate Kobe. Remember Shaq’s 2008 freestyle rap song “Kobe, how does my ass tastes?” 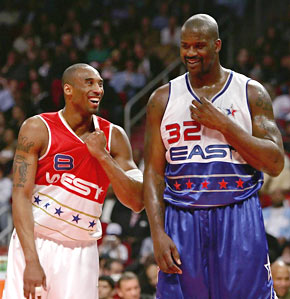 That song certainly wasn’t one of Shaq’s brightest moments, and Kobe got his payback when he won his fourth and fifth championship rings in 2009 and 2010.

O’Neal and Bryant will never be the best of friends off the court, but that’s OK. They totally respect one another now and have a greater appreciation for one another since O’Neal retired. You can’t tell the story of Shaq without mentioning Kobe. And you can’t tell the story of Kobe without mentioning Shaq. Like Forrest Gump said, they’re like two peas in a pod. They will forever be linked for the good times and the bad times, which Shaq mentioned in his YouTube message.

The Diesel may not have mentioned Kobe and his former Lakers teammates when his No. 34 went up in the Staples Center rafters, but he took the time to do it through YouTube. In the nearly six-minute video, he gave a big shoutout to his mom, dad, kids, the Buss family, Jerry West, Phil Jackson, his Lakers teammates, and even the celebrities who sit courtside. But he saved his best for last.

“Kobe, we had a million great times and a thousand bad times. But as a doctor, I know that a million outweighs a thousand and the positive always outweighs the negative. But I understand that people will always focus on the negative. To them I say, if being the best 1-2 punch ever created and winning three rings in a row is what you call a bad time, I don’t want any good times. You were my teammate and my brother, and I’m proud to call you both.”