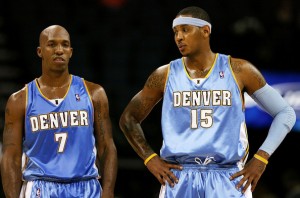 Score one for Chauncey Billups. The chess matchup between the Lakers and Nuggets took a different turn in Game 2. Lakers Coach Jackson geared his perimeter defense to smothering Billups in Game 1, putting Kobe Bryant on him for much of the game, but Billups made the proper adjustment in Game 2 by being more aggressive off the dribble instead of settling for long-range shots.

Denver Coach George Karl should also get some credit for making a key adjustment, inserting 6-8 Linas Kleiza early in the game instead of 6-1 Anthony Carter. Kleiza rewarded Karl for the opportunity by providing some much-needed outside shooting, which opened up the court for Carmelo Anthony, and his length gave the Nuggets another rebounder.

Kleiza finished with 16 points in 21 minutes, making 4 of 7 threes, and grabbed eight rebounds. Because of Kleiza’s play off the bench and Billups’ leadership, along with Anthony’s brilliance on offense, the Nuggets were able to defeat the Lakers, 106-103, in Game 2.

“We had to win this game,” Karl said. “We’re a more mentally tough team. You look at us from last year and where we are now, it takes time to do that. They know what it takes, what it means to play hard and play with passion.”

As good as Anthony was – and Melo was an absolute beast with 34 points and nine rebounds – his offense was matched by Kobe Bryant, who scored 32 points to lead L.A. While Melo and Kobe were staging their own personal war on the court and ultimately cancelling each other out, it was Billups who stepped into the role of closer and figured out a way to beat the Lakers down the stretch. With the ball in his hands, the Nuggets were able to play more efficiently in the halfcourt set and Billups foiled the Lakers’ pick-and-roll defense by attacking the seams.

With the way the officiating was going with both teams were getting the benefit of some questionable calls, Billups basically put his head down and attacked the basket. As a result, he went to the free throw line 16 times in Game 2, converting 13 shots, and finished with 27 points. Basically, Anthony – who has 73 points in the first two games against L.A. – kept the Nuggets in the game and Billups won the game in the end.

“We’re a special team and we got a chance to do something really special,” said Billups, who committed just one turnover in 43 minutes. “Personally, I’m not worried about what they’re saying about the Lakers. They’re a great team. They’re the No. 1 in the Western Conference. I’m more worried about trying to help my team advance the best I can.”

Denver’s 1-2 punch of Anthony and Billups are two reasons why the Western Conference finals is tied 1-1 and the Nuggets now hold home-court advantage.

“We can’t wait to get back on our court. We’ve been in L.A. a little bit too long now. We want to get back home in front of our crowd,” Anthony said.