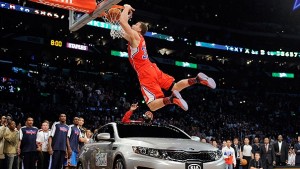 Blake Griffin soars over the hood of a car during the NBA Slam Dunk Contest during All-Star Saturday Night. (ASSOCIATED PRESS)

JaVale McGee was robbed! Not to take anything away from Blake Griffin, who had his moments during All-Star Saturday Night, but McGee’s dunks were far more difficult than what Griffin did for the whole event. I’ll even go a step further and argue that Serge Ibaka and DeMar DeRozan had more impressive dunks than Griffin.

I know Griffin was already anointed the dunk champion even before the competition began with all the hype that surrounded him prior to All-Star Weekend, and some of the hype was deserved, but Griffin’s performance didn’t exactly put him into the top 10 of all-time dunks in my humble opinion.

However, McGee’s trick of dunking on two baskets may have cracked my top 10. It’s not Vince Carter good, but it certainly deserves a lot more credit. I mean, the man dunked on two baskets standing side by side. I bet Blake Griffin can’t do that. McGee’s degree of difficulty was far more superior than Griffin’s or anyone else in the competition.

And McGee admitted that Ibaka stole one of his dunks during the early round, which threw off his game plan (that probably explains the poor effort in his final attempt). If the dunk McGee was referring to was anything close to what he was practicing, it would have been nice. Watch the video:

Griffin’s car dunk received the most attention because it was cool, and Kenny Smith certainly persuaded the judges with his Al Sharpton moment when he brought out the choir and riled up the crowd.

The dunk contest was lively and entertaining, which is what it should be. More props, more drama. However, I think the judges and the people who were voting on TV and texting were somewhat persuaded by the power of the Blake Griffin hype machine and didn’t give enough credit to the awesome creative dunks by McGee, Ibaka and DeRozan.

If I had to pick a winner, it would have been JaVale McGee. One more look at McGee’s spectacular dunk.