Utah Jazz forward Carlos Boozer pretty much had his way against the Denver Nuggets in the first round of the 2010 playoffs. He averaged 22 points and 13 rebounds in the series and beat up on Denver big men Nene, Kenyon Martin and Chris Andersen.

Now, Boozer is on the other side of the beatings. In two games against the big, bad L.A. Lakers, Boozer’s averages are down to 19 points and 12 rebounds; decent numbers but not good enough to get the Jazz over the hump – three tall humps to be specific.

The Lakers’ frontline of 7-foot center Andrew Bynum, 7-foot forward Pau Gasol and 6-10 forward Lamar Odom have become the story of the conference semifinals. All three are highly skilled big men with a ton of length, something Boozer and the Jazz are lacking.

Boozer, who is listed at 6-9 but is probably closer to 6-8, has struggled to find easy shots against the Lakers, and the same goes for 6-7 Paul Millsap, 6-5 Wesley Matthews and 6-6 C.J. Miles. Millsap’s numbers are actually up from the first round (21 points and 10 rebounds), but his shooting percentage is way down. After making 61% of his field goals against Denver, the Utah sixth man is shooting 51% against L.A. 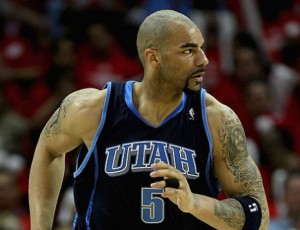 Despite being down 2-0 and having been dominated 101-78 on the boards in the series, Boozer remains confident his team will bounce back and make this a series.

Boozer believes the addition of Andrei Kirilenko will give the Jazz a boost in this series on both ends of the court.

“Andrei will help out a lot,” Boozer said of Kirilenko, who has been out since the playoffs began. “His length, his size, his skill set, his play-making ability. Obviously his defense and he can give Kobe a different look. It’ll be good to mix it up with him. I don’t expect for him to play a lot, but the time he’s on he can make a difference.”

Boozer said he and his teammates can’t worry about the Lakers’ shot-blockers (L.A. had 13 blocked shots in Game 2) and must continue to stay aggressive around the basket.

“We can’t worry about anything else, we just have to keep playing,” Boozer said. “If we have a lane, we’re going to drive and if we have a jump shot we’ll shoot it with confidence. They’re good. They’re big, they’re long, they play good defense. But we can’t shy away from them. We have to go right at them.”