Kendrick Perkins got the initial assignment on Dwight Howard and established a physical tone. Then, when Perkins needed a break, Rasheed Wallace came in and applied an even tighter grip on Howard.

Perkins and Wallace, along with forward Glenn Davis, took turns in harassing Howard into a 3-for-10 night shooting from the field and held the Magic All-NBA center to 13 points in Game 1 of the Eastern Conference finals. Defense was the key to Boston’s 92-88 victory and for Orlando to unlock the Celtics’ game plan, Howard needs to stop acting like Blankman and start playing like Superman

“Rasheed was phenomenal defensively tonight, and he’s been good in the playoffs for us and that’s what we wanted from him when we signed him,” Rivers said of Wallace, who also scored 13 points off the bench. 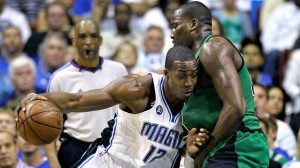 Wallace knows Howard very well, and he seems to get in Howard’s head whenever they go head to head, going to back to Wallace’s days in Detroit when the Pistons knocked out Howard and the Magic twice in the postseason.

“He’s a knowledgeable big who has a lot of game,” Rivers said of Wallace, who was acquired during the offseason to bolster Boston’s frontcourt. “I thought, defensively, he did some old tricks that were just terrific.”

On one play in the first half, Wallace forced Howard into a traveling violation after pulling the chair on him. Howard became visibly upset when Wallace pinned his arm as both men locked up on the wing trying to gain post position.

“They’re going to make it tough for him. They’re going to foul him and get physical with him,” Vince Carter said of the Celtics’ defensive approach in stopping Howard. “I mean, he’s a physical presence himself but that’s what they are going to do. We have to do a better job, first of all when he’s open, getting him the ball. And we have to make plays to make it easier for him. Once we’re making shots and making plays, then we let them kinda worry about what we’re doing and I think it opens things up for him. Some nights when he gets rolling, it opens things up for us. So we have to return the favor.”

Carter’s advice to his teammate?

“Just keep playing. It’s going to be a battle, it’s going to be a war. We know that,” Carter said. “They’ve been there before, we’ve been through some battles throughout this season and we still feel good about ourselves. We’re going to continue to support him and stay on him to make sure he’s not frustrated, and just play basketball and have fun.

“He puts pressure on himself because he wants to win. He wants to be perfect or as perfect as possible and do what he has to do to lead this team. But at the same time we always tell him he’s not out there by himself. We’re going to support him. And I think when he realizes that, he settles down.”

Carter is confident the Magic will bounce back. He said it starts with better execution on offense, avoid turnovers and match Boston’s intensity on both ends of the court.

“I don’t think we were prepared for the level that they were ready to play. They were ready to go from the jump and we weren’t on their level in the beginning more than anything,” Carter said of the Celtics, who took a 22-14 lead in the first quarter and led by 16 after the third quarter.

“They’re relentless, they’re aggressive. They work on a string and play well together. So, we’ll just have to be smart, continue to move the ball to the open man to get good shots. They do a great job of contesting when they took away the paint. Took us a while to figure it out, but when we did we played a lot better. When you have a team like that that plays smothering defense and very physical at the same time, you just have to be patient. They tend to rush you, and that’s how they play.”