Two years ago, Brandon Jennings put his basketball career on the line when he signed with Italian club Lottomatica Virtus Roma of the Euroleague.

At the time, the decision was considered both risky and a huge gamble financially. If Jennings’ European experiment fails and he falls flat on his face in the Italian ruins, his chances of coming back to the States and playing in the NBA would be nothing but a dream. But if Jennings succeeded in Europe, he could change the way high school players perceive playing in the Euroleague and at the time he would improve his draft stock.

Very few people thought Jennings could pull it off. Basically, it was Jennings, his mother and brother, and Sonny Vaccaro. That’s it. 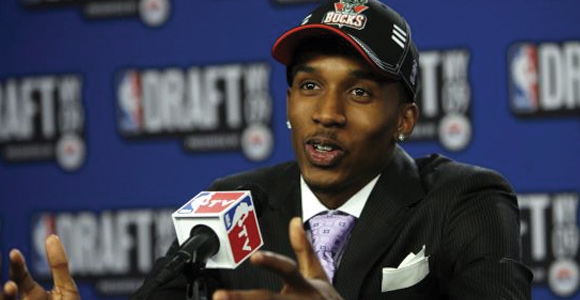 The Milwaukee Bucks have found a gem in point guard Brandon Jennings.

When the Milwaukee Bucks selected Jennings with the 10th pick in the NBA draft last June, they knew they got a good player but who would have thought Jennings would be GREAT. Probably himself, his mother and brother and Sonny Vaccaro.

Jennings has certainly made the Bucks look good with their gamble and made the all the naysayers look extremely foolish.

The 6-1 point guard is averaging 25.5 points per game, which ranks him eighth in the NBA and 5.5 assists. He’s also making 54% of his 3-point shots, something most scouts didn’t think he could do based on how he shot the ball in Europe.

Jennings punched his ticket on the Rookie of the Year ballot with a 55-point game on Nov. 14 against Golden State.

Jennings, born and raised in Los Angeles, admitted that even though it was tough sledding for him during his first weeks in Italy, he persevered and said his one-year stint in Europe helped him grow as a person and gave him the confidence that he can compete at the pro level.

The fact that Jennings survived his European odyssey and is currently thriving in the NBA makes Vaccaro believe “the kid” has already succeeded.

Based on what Jennings has done so far on the court, hard to argue against Vaccaro’s sentiment.