Milwaukee coach Scott Skiles knows a good point guard when he sees one, and he definitely saw something in Brandon Jennings.

Skiles made Jennings the quarterback of his team from Day 1 and the 20-year-old rookie point guard with an old-school game has rewarded his head coach with an amazing season.

Showing great leadership skills and incredible poise in his first time in the postseason, the confident and talented Mr. Jennings single-handedly pushed the underdog Bucks – who were without leading scorers Andrew Bogut and Michael Redd – to a Game 7 against the Atlanta Hawks, and his accelerated learning curve is something the Bucks can benefit from in the future.

Jennings mixes a blend of technically sound decisions with a little bit of And-1-Mixed-Tape flare. His game is comparable to a young Kenny Anderson, but with a much better jump shot.

“To be a great point guard, you have to be a vocal leader and you have to take chances,” said Jennings, whose Kid ‘N Play haircut shows his affinity for pop culture history and his fearlessness. Not many kids can pull off the Kid ‘N Play look.

When asked what he has learned in his playoffs debut, Jennings said: “Just keep fighting. “I just kept attacking. I got a little motivation before the game. It made me come out and play aggressive,” said the 6-foot-1 left-hander, who has bumped up his scoring average from 15.5 to 20.8 in the playoffs.

When asked specifically if the Rookie of the Year voting breakdown had a little something to do with his perked up energy and extra incentive in the playoffs, Jennings replied: “Maybe.” 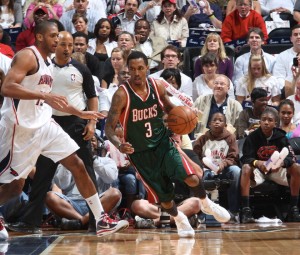 “Scott Skiles told me something right around the All-Star break that Brandon Jennings wasn’t getting credit for being a student of the game and gym rat, and I think that’s what’s starting to show now,” former NBA forward and current NBATV studio analyst Dennis Scott said on “NBA Game Time.”

“Last year, going over to Italy, people thinking it was a bad move, he didn’t show well and maybe that’s why he slipped in the draft. Now, he’s proven why he went No. 10 and why him and Scott Skiles are on the same page. He’s proven he’s one of the elite point guards in his young career.”

Eric Snow, a former NBA point guard and now a commentator on NBATV’s “Game Time,” said Jennings doesn’t get enough credit for being able to absorb the NBA game in such a short amount of time after spending one season in the Italian League last season.

“He has kept his team afloat and kept them with their sharpness all the time, and a lot of it has to do because Scott Skiles demands it,” Snow said. “When he first got the starting position, most of us were shocked because it was so sudden, so early in the season. But Scott has seen something in him and he’s been able to display that all season long.”

So, who is the better rookie point guard: Steph Curry or Brandon Jennings?

“Steph Curry may be more [talented], but Curry to me wouldn’t be a better fit for Scott Skiles. Jennings has the right mode, the right mentality, and still a little feisty.”

Snow added: “Playing point guard in the NBA is extremely tough, especially for a young guy. It’s hard to command that respect because you’re trying to learn at the same time.”