A knee injury was not enough to keep Portland Trail Blazers guard Brandon Roy from missing the playoffs.

Eight days after undergoing knee surgery to fix a torn meniscus on his right knee, Roy returned to the basketball court and played in a pivotal playoff game at the Rose Garden.

OK, maybe it wasn’t quite as dramatic as the Willis Reed moment at Madison Square Garden and Roy wasn’t dragging his leg around the court. However, Roy’s miraculous return was a moment Blazers fans won’t soon forget.

Roy scored just 10 points in the game, but the 26 minutes he spent on the court gave the Blazers a huge emotional boost, carrying them to a 96-87 victory over the Phoenix Suns and tying the series at 2.

Portland didn’t expect Roy to return so quickly and were prepared to go without him in the first round. But he jogged on the court with his teammates for warmups after getting cleared by his doctors. He then entered the game with 4:06 left in the first quarter and the Blazers seem to feed off the crowd’s excitement. 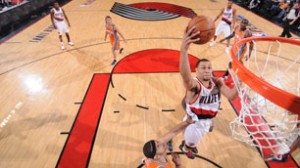 “We got our main guy back. Knowing that he was out there, I thought our guys were calm. I thought we played the game that we needed to play,” said Portland coach Nate McMillan, whose team has been besieged by injuries all season long, but Roy’s amazing recovery has given the Blazers a shot in the arm – or leg.

“I just didn’t feel right, you know, sitting in the training room knowing that I could contribute. So I just had to keep getting back at Coach,” said Roy, who played the entire fourth quarter.

“I was going to do everything to get out there on the court. I felt good out there on the floor, making some moves and just trying to get my rhythm back. I was just happy we got a big win. LaMarcus did a good job of carrying us.”

Roy’s presence certainly helped LaMarcus Aldridge, who hit 11 of 19 shots from the field and scored a game-high 31 points.

“As soon as he checked in the game and made his first open shot I said, ‘Thank God he’s back.’ Just having him out there is so big for us because any second he could get going,” said Aldridge, who added 11 rebounds.