Bruce Bowen recently announced his retirement from the NBA. It is almost a certainly that 99% of the players in the Association just breathed a sigh of relief now that Bowen has hung up his sneakers for good.

Throughout his 12-year career, eight of them spent with the San Antonio Spurs, Bowen was known as one of the best perimeter defenders. He was named to the NBA’s All-Defense team eight times and runner-up three times for defensive player of the year voting. Even though he only had 712 steals in the 873 games he played, Bowen was considered a superb individual defender, similar to a great shutdown corner in the NFL. 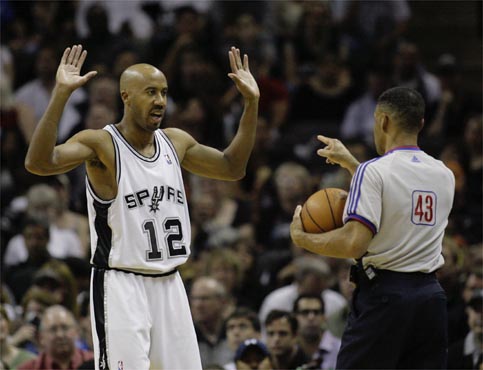 Bruce Bowen was a member of the NBA's All-Defense team eight times, but was also known for some dirty tactics. (ASSOCIATED PRESS)

Defense was Bowen’s calling card. After four uneventful first four years in the league, the 6-foot-5 guard/forward out of Cal State Fullerton began to earn a reputation for being a tough and hard-nosed perimeter defender during the 2000-01 season with the Miami Heat.

Spurs coach Gregg Popovich took notice and signed Bowen in 2001, mainly to guard Lakers All-Star guard Kobe Bryant, who had been a torn on the side of the Spurs in the playoffs. Bowen’s pesky defense helped the Spurs win NBA championships in 2003, ’05 and ’07.

He was always assigned to the opposing team’s best scorer. And more often than not, Bowen would win a lot of those one-one-one battles, frustrating the opposition with an array of “tactics” that some might even described as borderline illegal or dirty. Many opposing players have called him out publicly for his sneaky shoves, cheap shots and penchant for stepping between a player’s legs while shooting a jump shot.

Lakers coach Phil Jackson tabbed Bowen “Edward Scissorhands” for the way he slaps at the ball and how his fingers end up scratching players on the hands and forearms.

Bowen’s streak of 500 consecutive games ended when he drew a one-game suspension for kicking New Orleans Hornets point guard Chris Paul in March of 2008. Amare Stoudemire once accused Bowen of purposely kicking him in the playoffs. Mild-mannered Dirk Nowitzki has complained numerous times about the “dirty play” from one of the Spurs, though he has never mentioned Bowen by name.

Bowen recently acknowledged to the Associated Press that only one play in which he purposely kicked another player: Ray Allen in a March 2006 game against the Seattle SuperSonics, a scuffle that earned him a $10,000 fine.

“That play, I remember and I regret because of me intentionally doing that,” said the 38-year-old, who claims that his reputation as a sometimes dirty player does not hold a lot of weight.

“People are entitled to their own opinions. I’ve been fighting that for quite some time,” said Bowen. “It just so happened that I was there after everyone stuck their hands in the cookie jar and then the lights came on and I had a cookie.”