LeBron James won Round 2 of his showdown with Kobe Bryant, and I have a funny feeling it won’t be the last time we’ll see those two dueling on the basketball court this season.

LeBron James scored 12 of his 37 points in the fourth quarter as the game turned into a playoff-style, possession-by-possession struggle. Bryant tried to match James shot for shot, but his impatience and single-minded approach ultimately led to the Lakers’ downfall. The Cavs won, 93-87, despite not having point guard Mo Williams (who is out a month with an injured shoulder) in part because Bryant tried to beat James instead of beating the Cavs.

Bryant led the Lakers with 31 points but it took 31 shots for him to reach that total. He made just 12 field goals for the game and was 1-for-6 in the fourth quarter for four points. 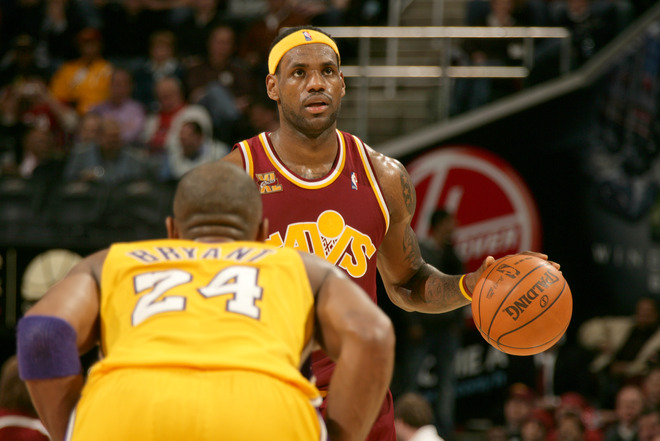 LeBron James not only won his individual battle with Kobe Bryant (James scored 37 points, Bryant had 31), but he also led his Cavaliers to second victory over the defending world champs. (NBAE/GETTY IMAGES)

Cleveland’s physical defense forced the Lakers out of their comfort zone and the Cavs big men scored a surprising draw with the more talented Lakers frontline.

“Their big [players] were very active, very physical and wore us down,” said Bryant told the Los Angeles Times. “I think last year we were probably a little hungrier and played a little harder,” he said. “This year, when we played them two times, they were the hungrier team. They sense that they want to win a championship, they want to go after it, so they’re playing with a sense of urgency that we played with last year.”

Bryant was quick to blame his bigs for a poor effort, but what he should be doing is blaming himself for not trusting his supporting cast. The Lakers are a good team when Bryant takes over, but they are a championship team when Bryant gets his teammates involved.

The Lakers got off to a great start but then stalled in the second quarter and the rest of the game was played at Cleveland’s pace. The Lakers came into the game thinking they can exact revenge for what the Cavs did to them on Christmas Day, but now it seems the task of taking down the Cavs will be a lot tougher than expected.

“[The Cavs] are physical, tough-minded and hard-nosed-type team,” Bryant told reporters after the game.  “We have to step up and match that — that’s not part of our DNA.”

Can’t wait for Round 3 of Lakers vs. Cavs.