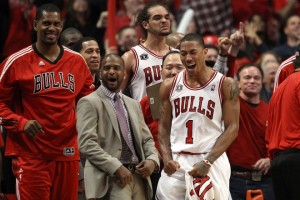 Derrick Rose celebrates with his teammates after a dominant win in Game 1 of the 2011 Eastern Conference finals. (GETTY IMAGES)

First of all, let me apologize to the Chicago Bulls for underestimating their greatness. Apparently, I’ve been listening to too many pundits who have already crowned the Heat as NBA champs once the Lakers and Celtics were eliminated from the playoff picture.

Put a big hold on that NBA Finals party in South Beach because the Bulls are not going away anytime soon. The top-seeded team in the 2011 Eastern Conference playoffs dismantled the star-studded Heat by 21 points in Game 1 of Eastern Conference finals and, the way the Bulls suffocated the Heat defensively, Dwyane Wade and LeBron James will need to be extra special for Miami to win this series.

What’s really stunning about Game 1 was the way James was completely taken out of the game by Bulls forward Luol Deng. Deng is a good defender, but the way he locked up James was absolutely ridiculous. Compounding matters was the way Deng outplayed James on offense, outscoring the two-time NBA MVP 21 to 15 and held him to 5-of-15 shooting from the field.

“All of us as a team did a good job on all those guys,” Deng said. “We all know LeBron is a great player. He missed some shots he normally makes, we’re not going to take all the credit.”

Now, I’m not going to jump ship and proclaim Derrick Rose the greatest player on the planet and the Bulls the greatest show on Earth. However, the Heat truly have their work cut out for them to try to figure out how to solve this puzzling Chicago defense, which has now defeated Miami four times this season.

“We took it on the chin tonight,” Heat coach Erik Spoelstra said. “Second-chance points was a big factor. Offensively, we got away from the things we normally do and went a little sideways in all those effort battles. Their defense was good, and we anticipated that. Their a great defensive team. You have to be able to execute.”

Spoelstra comes for the Pat Riley school of coaching, and Riley always emphasized that “no rebounds, no rings.” In Game 1, the Bulls outrebounded the Heat, 45-33, and came up with 19 offensive rebounds. The Bulls had a 31-8 advantage in second-chance points, a stat that certainly didn’t sit well with Spoelstra.

“They just took it to another level. The offensive rebounding really affected us,” the Heat coach said. “We had some great stops, but we were not able to come up with the 50-50 ball or rebound to seal it, and they made us pay.”

“They’re loading their defense so much on Dwyane and LeBron off the dribble that [Chris Bosh] was able to be a recipient in the paint,” Spoelstra explained why Bosh had a team-high 30 points.

“We’ll adjust, but certainly the fist fight under the glass will be the start.”