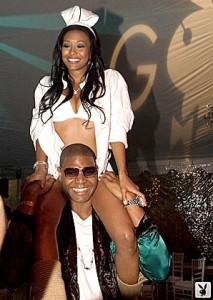 Your name is Andrew Bynum, starting center for the most popular NBA team in the world. You’re 21 years old and live in the heart of Hollywood. But because of a bum knee, you have some free time. So, if the Playboy Mansion sends you an invitation, would you turn it down?

Johnny Drama risked life and limb by stashing himself in the trunk of Turtle’s ride to avoid security check just so he could set foot in the Mansion and live out his fantasies in the Grotto.

However, despite having said all that, the picture of Bynum carrying Playmate Nicole Narain on his shoulders doesn’t exactly paint a good picture for the Los Angeles Lakers center. He claims he is furiously rehabbing his right knee, but the perception revealed by the photograph tells a different story. It gives the impression that Bynum would rather spend his day with Playmates than with his Lakers teammates. It gives the impression that Bynum is not taking his rehab seriously. 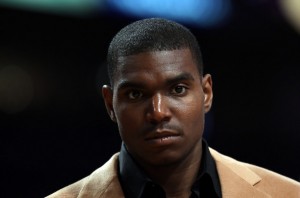 The Los Angeles Lakers will need a healthy Andrew Bynum for the NBA playoffs.

Blogger Arash Markazi wrote: If Bynum isn’t healthy enough to play, should he be able to live out his Playboy fantasy in the meantime? Maybe, but while he’s rehabbing his injury and the Lakers play shorthanded without him, perhaps it’d be wise for him to keep a low profile and sit out a couple of pajama parties. The grotto and Playmates will still be there. The Lakers can only hope the same can be said for Bynum come playoff time.

There is certainly nothing wrong with Bynum taking time off to be with Hef and the Playmates. However, there is a time and place for that. He could do this during the offseason when he’s not on company time and when Lakers are hoping and praying for his speedy return to the court. The timing of his Playboy trip, coupled with the not-so-flattering picture, puts Bynum in a very sticky situation.