With one thunderous dunk, Andrew Bynum served notice to Oklahoma City and the rest of the league that his strained Achilles’ tendon is doing just fine.

Bynum posterized Nenad Krstic in the first half of Game 1 in the Lakers’ first-round series against Oklahoma City, highlighting a strong start for the defending world champions that saw them take a 27-13 lead in the first quarter.

“The more I keep playing with this aggressive nature, I think I’m gonna get better at it and my teammates will trust me even more with the basketball,” said Bynum, who scored nine of his 13 points in the first quarter. He finished with 12 rebounds and blocked four shots, but altered several more, in 31 minutes to power the Lakers to an 87-79 victory.

The extended minutes on the floor was not the plan going in, but Bynum said he felt good despite playing in his first game since March 19 when he strained his Achilles’ tendon. 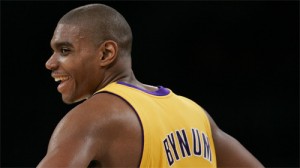 The Lakers are certainly glad to have Bynum back after being sidelined for a month. His absence forced Lamar Odom into the starting lineup which hurt the Lakers bench, and Pau Gasol had to slide over to the center position. But the biggest thing the Lakers missed while Bynum was sideline was his defense.

Bynum is the anchor of Phil Jackson’s defense scheme. His length discourages opponents from driving to the basket and negates any one-on-one post ups from opposing centers.

And when Bynum is paired with Gasol, the Lakers have two excellent post players on offense, and defensively it is almost impossible to get easy baskets against the two 7-footers. It’s like having two Magic Mountain theme parks blocking the basket.

“Me playing the 4 and Andrew being in there gives us good balance,” said Gasol, who had 19 points, 13 rebounds and three blocked shots against the Thunder.

If the Lakers are to repeat as NBA champs, they are going to need a healthy Andrew Bynum, and his value will increase with each round.

He’ll play a huge role in the conference semifinals with a potential matchup against Nene and the Denver Nuggets, and then he’ll be a big factor in the conference finals with a potential matchup against either Dallas or San Antonio. And should the Lakers reach the NBA Finals, Bynum will go head-to-head with either Cleveland’s Shaquille O’Neal or Orlando’s Dwight Howard.